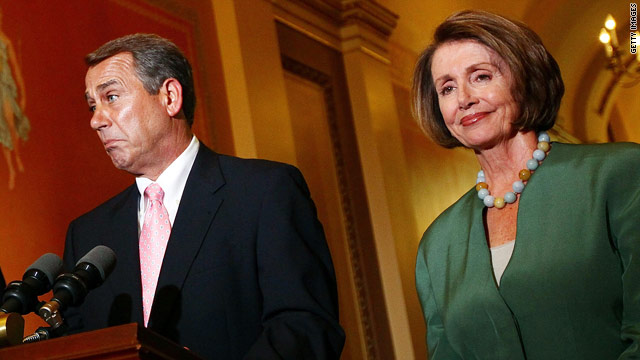 (CNN) -- Republicans are predicting big wins in the November midterms. Across the aisle, Democrats are saying the same thing about their chances at the polls. But both can't be right.

Republicans speculate that they will take back the House -- and possibly the Senate -- as voters express their frustration at where Democrats and President Obama are taking the country.

"I think it's pretty clear that the American people are tired of the job-killing agenda in Washington, D.C. They want the spending spree to stop," House Minority Leader John Boehner said on "Fox News Sunday."

"I think we're having a good year, but we've got a lot of work to do before the Election Day on November 2," he said.

Boehner advised Republicans heading home for the August recess to "talk about the better solutions that Republicans have been offering over the last 18 months."

His counterpart in the House, Speaker Nancy Pelosi, encouraged her members to do the opposite.

"We've been legislating for the past 18 months. The other side has been in campaign mode for 18 months, saying no, stopping job creation and the rest. But our members are the best salespersons for their own districts. They've been elected there. They know their constituents," she said on ABC's "This Week."

Sen. Carl Levin, a Democrat from Michigan, said that although his party will probably lose a couple of seats, "it's going to be a lot better than what people now look at."

This year, 37 seats are up for grabs in the Senate, and 18 of those are considered at least somewhat vulnerable, according to The Rothenberg Political Report, a nonpartisan newsletter covering campaigns and politics. Eleven of those are held by Democrats, and seven are held by Republicans.

In the House, all 435 seats are on the ballot, and 88 are considered vulnerable, according to Rothenberg. Twelve are held by Republicans, and 76 are held by Democrats.

In order to net control, Republicans need to pick up 39 seats in the House and 10 in the Senate, said Nathan Gonzales, political editor of The Rothenberg Political Report.

"The most likely scenario is the Republicans gain 28 to 33 seats -- but the House is definitely in play. The majority is at significant risk for Democrats," Gonzales said.

In the Senate, however, Republicans have a tougher task.

"Republicans need to win every competitive race in order to take the majority. It's possible but difficult," Gonzales said.

Although the election is still three months out, the trajectory of the cycle is not going to change, Gonzales added.

"Republicans will gain seats in November. We just don't know how many yet," he said.

White House Press Secretary Robert Gibbs had some fellow Democrats fuming last month over his take on the midterms.

"I think there's no doubt there are enough seats in play that could cause Republicans to gain control. There's no doubt about that," he told NBC's "Meet the Press."

Asked Sunday about those comments, Pelosi said, "with all due respect, I don't spend a whole lot of time thinking about what the president's employees say about one thing or another."

"We have a solid plan of messaging and mobilizing at the grass-roots level and management of our campaigns. And we have a two-to-one advantage money-wise. So we feel very confident about where we are, whether that's well known to that gentleman or not," she said.

After facing backlash from Democrats, Gibbs revised his prediction and said the party will hold on to the House and Senate.

A CNN/Opinion Research Corp. poll indicates that Democrats and Republicans are tied on which party can bring the kind of change the country needs.

"These results illustrate the reasons why the Democrats are now behind on the so-called generic ballot question," CNN Polling Director Keating Holland said. "The Democrats manage no better than a virtual tie on issues, but they are behind when it comes to handling the government. And when the presidency is not at stake, the congressional elections are the only way that voters can do something about the direction the government will take."

Full results of the poll (PDF)

The ethics committee has been looking into whether Waters violated House rules when she helped arrange a meeting in September 2008 between Treasury Department officials and a bank she and her husband had ties to financially.

Longtime Rep. Charlie Rangel also could face an ethics trial, barring a settlement between him and the committee members.

Bill Kristol, editor of conservative magazine The Weekly Standard, said Republicans would be "foolish" to jump on the ethics problems because they are not unique to the Democratic Party.

"They should just shut up. There's a bipartisan ethics committee. Let the process go forward," he told Fox.

"Democrats are going to lose the House and suffer the loss of a lot of Senate seats because of their policies," Kristol said. "And the idea that Republicans should go around throwing stones at Charlie Rangel, I think, is just foolish on their part."

Lawmakers are entering the most crucial part of the campaign season, when candidates start to engage each other and their messages begin to stick with voters.

But as the cliché goes, three months is an eternity in politics.

"I'd love to have the election tomorrow, but obviously it's not tomorrow," Senate Minority Leader Mitch McConnell told Fox when asked whether anything short of a Republican takeover could be considered a victory for Democrats.

"If the election were today, we'd certainly have a good day, but it's a long way until November. They have a lot of money. They've outspent us for the last three cycles, and I expect them to do it again. They're not going to go down easily," McConnell said.