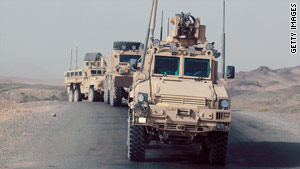 The Obama administration has made clear some troops will start withdrawing by next July.
STORY HIGHLIGHTS

Washington (CNN) -- Less than a year from the scheduled start of withdrawing some troops from Afghanistan, opinions remain varied about exactly what will happen when the transition begins at the end of June 2011.

The Obama administration has made clear some troops -- no one can say how many -- will start withdrawing by next July from stable areas where Afghan forces can provide security.

However, questions over how to measure success and whether the almost 9-year-old war is worth the continuing U.S. investment in lives and resources are gaining prominence as congressional midterm elections approach in November.

In interviews with military and political leaders broadcast Sunday, scenarios presented on what happens next year ranged from guarded optimism to serious concern. While most views followed expected party talking points, all appeared grounded in the common belief that success is vital even as they differed on what it would be.

On CNN's "State of the Union," Democratic Sen. Carl Levin of Michigan defended the planned troop drawdown next year as a necessary part of strategy.

"That date is very visible now," Levin said, adding: "It's critical that that date was set to show that it isn't a blank check, it's not an open-ended commitment of American troops in the same numbers that we're going to have there."

Already, he said, the Afghan army is taking over some aspects of security, which gives a psychological boost to the local population while denying the Taliban insurgents of a propaganda tool.

"When their own people see that, it is going to make a difference," Levin said. "And when the Taliban sees that they are not able now to just paint this as ... a lot of foreign troops present in Afghanistan, but now it's their own Afghan army, a popular, respected army, that they are taking on more and more during this next year, that that is going to make a difference. That's a real nightmare for the Taliban to be up against an Afghan-led effort.

On the same program, however, Republican Sen. Lindsey Graham of South Carolina worried that the Afghan forces and central government may not be ready to assume the necessary responsibilities within a year.

"[G]enerally speaking, this time next summer, we're still going to be engaged in one hell of a fight," Graham told CNN. "We're going to need every troop we have today, I think, still in Afghanistan next year."

According to Graham, it will be clear by the end of this year where things stand in Afghanistan.

"If, by December, we're not showing some progress, we're in trouble," he said. "And the question is: what is progress? Without some benchmarks and measurements, it's going to be hard to sell to the American people a continued involvement in Afghanistan."

Other Republicans are harsher critics of President Barack Obama's war strategy, saying that any withdrawal date -- regardless of intention -- provides a strategic and psychological boost to the enemy.

"No, we're in it to win it. And if we're not, then the American public needs to know that, too," Palin said.

Palin acknowledged the nation was tiring of the war that started in October 2001 in response to the September 11 terrorist attacks that year.

"We want to know that if we're engaged in such activity where we are protecting our own country, we're helping to protect our allies, we had better be in it for ... the long haul," Palin said. "But we had better be in it to win it or, no, we're not going to keep supporting this idea of sending innocents, our young men and women, America's finest, over there for some futile effort."

In an interview with CBS conducted last week and broadcast Sunday, Obama insisted the mission to prevent terrorists from operating out of Afghanistan was worth the current deployment, including 30,000 additional U.S. troops he ordered in last year to increase the eventual total to about 100,000.

"If I didn't think that it was important for our national security to finish the job in Afghanistan, then I would pull them all out today," the president said.

Top military officials emphasized that the draw-down date is part of a strategy, with the actual number of troops withdrawn depending on conditions on the ground. Asked about remarks last month by Vice President Joe Biden that the figure could be "as few as a couple of thousand" troops, Defense Secretary Robert Gates seemed to agree.

"My personal opinion is that drawdowns early on will be of fairly limited numbers, and as we are successful, we'll probably accelerate," Gates said on the ABC program "This Week." But, again, it will depend on the conditions on the ground."

At the same time, Gates emphasized that it was crucial for the United States to demonstrate a long-term commitment in order to ensure the trust and cooperation of Afghanistan.

"We need to re-emphasize the message that we are not leaving Afghanistan in July 2011," he said. "We are beginning a process... and the pace will be set by conditions on the ground."

He welcomed the prognostication by critics that the Taliban fighters will simply hunker down until next July in order to strike after U.S. troops start leaving, saying: "We will be there with a lot of troops."

The purpose is to ensure stability in order to turn over control to the Afghan government and people, not to embark on nationwide reconstruction, Gates said.

U.S. efforts will focus on "those civilian efforts and governance that help us in our security objectives," he said.

Adm. Mike Mullen, the Joint Chiefs of Staff chairman, told NBC's "Meet the Press" that the main goal is to prevent Afghanistan from again becoming a safe haven for al Qaeda.

Even though CIA Director Leon Panetta has said only 50 to 100 al Qaeda figures remain in Afghanistan, Mullen made clear that a hard fight remains to enable the Afghan government to defeat Taliban insurgents who harbored al Qaeda in the past.

"We're at a point now where over the course of the next 12 months, it really is going to, I think, tell the tale which way this is going to go," Mullen said, later adding: "Certainly the longterm goal is to make sure that, with respect to the population in Afghanistan, that there's a governance structure that treats its people well. ... But to say exactly how that's going to look and what specifics would be involved, I think it's just way too early."

Influential Democrats, meanwhile, signaled the growing impatience in their ranks for a war effort that continues to inflict an economic and human toll.

House Speaker Nancy Pelosi told the ABC program that she hopes that next year's withdrawal brings home more than the "couple of thousand" troops Biden had predicted.

At the same time, Pelosi acknowledged "it's not going to be turn out the lights and let's all go home in one day."

Democratic Sen. John Kerry of Massachusetts told CNN that Obama was determined to bring the conflict to a new phase that allows a U.S. drawdown.

"He is also determined not to undermine his own effort and not to undermine the military effort on the ground, and the sacrifice that our troops have made," Kerry said. "The president is not going to suddenly pull the rug out from under the very efforts that we've all been engaged in over these years. That would be folly. And I don't see him doing that."

Graham, who has sided with Democrats on some issues, expressed concern that some anti-war elements of both the political left and right could undermine the war effort.

Graham added that liberals could also refuse to back the president's plans in Afghanistan.

"You've got people on the left who are mad with the president because he is doing exactly what [former President George W.] Bush did and we're in a war we can't win," Graham said, adding: "My concern is that, for different reasons, they join forces and we lose the ability to hold this thing together."