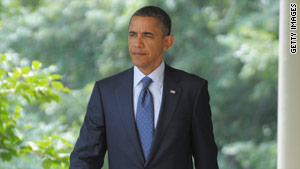 Washington (CNN) -- President Barack Obama said Tuesday that he is "concerned about the disclosure of sensitive information" about the U.S. mission in Afghanistan by the whistle-blower website WikiLeaks.

But the documents included in the disclosure don't shed much new light on the war, he asserted.

The administration has been critical of the decision by WikiLeaks to publish what it said are about 76,000 U.S. military and diplomatic reports about Afghanistan filed from 2004 to January 2010.

"While I'm concerned about the disclosure of sensitive information from the battlefield that could potentially jeopardize individuals or operations, the fact is these documents don't reveal any issues that haven't already informed our public debate on Afghanistan," Obama told reporters at the White House. "Indeed, they point to the same challenges that led me to conduct an extensive review of our policy last fall."

Obama referenced the reports shortly after meeting with top congressional Democrats and Republicans to discuss a range of issues, including small business jobs legislation, energy reform, the Afghanistan war funding bill and the need to fill judicial vacancies.

"If we want our judicial system to work -- if we want to deliver justice in our courts -- then we need judges on our benches," Obama said. "I hope that in the coming months, we'll be able to work together to ensure a timelier process in the Senate."

Obama praised energy reform legislation being unveiled by Senate Majority Leader Harry Reid, D-Nevada. Among other things, the bill is expected to mandate that utilities generate a portion of their power from renewable energy sources. It would also encourage the production of trucks fueled by natural gas.

Many liberal Democrats, however, are upset that the bill does not include caps on carbon emissions. Obama said Tuesday that Reid's bill is "only the first step" and promised to keep pushing for broader reform.

"If we've learned anything from the tragedy in the Gulf, it's that our current energy policy is unsustainable," he said.