Obama to appear on daytime talk show 'The View' 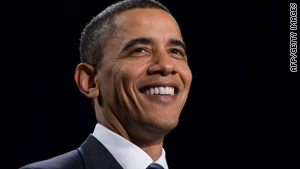 President Obama is expected to talk about family life inside the White House on "The View."
STORY HIGHLIGHTS
RELATED TOPICS

The interview, scheduled to be taped on Wednesday, will touch on topics including his administration's accomplishments, jobs, the economy, the Gulf of Mexico oil disaster and family life inside the White House.

Obama last appeared on the ABC program in March 2008, while he was a U.S. senator. He also was a featured guest in November 2004, when promoting his book, "Dreams from My Father: A Story of Race and Inheritance." His wife, Michelle Obama, was a featured guest co-host in June 2008.

Obama's appearance is part of the show's continuing "Red, White & View" campaign, which features political guests and discussions. Barbara Walters, creator/executive producer and co-host of "The View," will make an in-studio appearance to speak with Obama. Walters underwent heart valve replacement surgery in May.

Vice President Joe Biden appeared on the "The View" in April.

While a presidential appearance on the talk show circuit is a new phenomenon, candidates for the nation's highest office have been trying to soften their image in alternative television formats for decades. Richard Nixon briefly appeared on "Rowan & Martin's Laugh-In" during the 1968 general election, famously uttering, "Sock it to me?"

Ronald Reagan appeared on "The Tonight Show" twice in the early 1970s when he was governor of California; then-Arkansas Gov. Bill Clinton was on the show in 1988. Clinton also made an appearance on "The Arsenio Hall Show" in June 1992, treating the audience to a saxophone rendition of "Heartbreak Hotel."