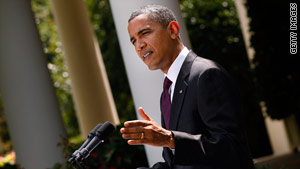 "You'd think that reducing corporate and even foreign influence over our elections would not be a partisan issue," Obama told reporters in a White House appearance that was scheduled earlier in the day.

The Senate is expected to hold a procedural vote Tuesday on whether to end debate on the bill, and Democrats fear a unified Republican filibuster will prevent the measure from moving to a final vote.

A key Republican, moderate Sen. Susan Collins of Maine, opposes the bill because it puts less restrictions on labor unions -- a key Democratic constituency -- than on corporations and other large donors, an aide to Collins said Monday.

"The bill would provide a clear and unfair advantage to unions, while either shutting other organizations out of the election process or subjecting them to onerous reporting requirements that would not apply to unions," said the Collins aide, Kevin Kelley.

Collins is one of the few Republican senators considered a possible vote in support of Democratic-backed proposals. With Republicans holding enough Senate seats to block legislation, the inability of Democrats to attract support from Collins shows the precarious status of the bill.

The House already passed its version of the bill. Senate Democrats tried to address GOP concerns by cutting out a provision in the House bill that would allow labor unions unfettered transfers of funds from member dues between national organizations and state affiliates.

Obama accused the Republican leadership in the Senate of "using every tactic and every maneuver they can to prevent it from even coming up for an up-or-down vote."

"We can't afford these political games," Obama said, adding that "a vote to oppose these reforms is nothing less than a vote to allow" special interests and foreign interest to hold sway over U.S. elections.

Referred to as the "Disclose Act," the bill is a Democratic-led response to a Supreme Court ruling in January that struck down key provisions of campaign finance laws restricting spending by corporations, unions and independent groups.

Obama, who has criticized the Supreme Court ruling, said the bill would allow Americans to know who is spending money to try to influence election campaigns.

"This is an issue that goes to whether or not we're going to have a government that works for ordinary Americans; a government by and for the people," Obama said.

Some Republicans have complained the bill touted by Democrats as promoting transparency was written behind closed doors and would violate the right to free speech.

When the House passed the bill, the president of Citizens United -- which filed the lawsuit that led to the Supreme Court ruling -- criticized Democratic sponsors of the House bill for exempting major organizations such as the National Rifle Association, labor unions and others.

"Citizens who are members of other grassroots groups will be muzzled by this legislation for no reason other than that they belong to a group without the financial and lobbying muscle to exempt itself from this bill," said the statement from David Bossie of Citizens United.

"This bill is nothing more than incumbent protection in its worst and most cynical form," Bossie's statement said. "The American people will not be fooled so easily."

Although the bill is aimed at reducing the influence of special interests in campaigns, it includes a major loophole exempting some major interest groups, including the NRA and AARP, from the disclosure requirements.

Under the bill, groups with 500,000 dues-paying members that have existed for at least 10 years and have members in all 50 states do not have to reveal their donors.

Kelley, the Collins aide, also cited those loopholes in explaining the senator's opposition.

"Sen. Collins also believes that it is ironic that a bill aimed at curtailing special interests in the election process provides so many carve outs and exemptions that favor some grassroots organizations over others," Kelley said in a statement. "This too is simply unfair."