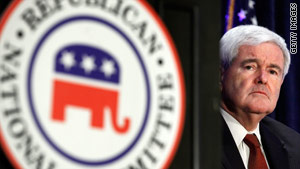 (CNN) -- Former House Speaker Newt Gingrich won't yet say if he's running for president in 2012, but he picked up an unlikely endorsement Sunday.

Gingrich, a leading conservative Republican, has "a ton of ideas to move the country forward," former Vermont Gov. Howard Dean, a past chairman of the Democratic National Committee, said on "Fox News Sunday."

Gingrich, who also appeared on the show, joked that Dean's backing could doom his candidacy if he runs.

"Here's my opponent's clip in the primaries," Gingrich said of the Dean comment.