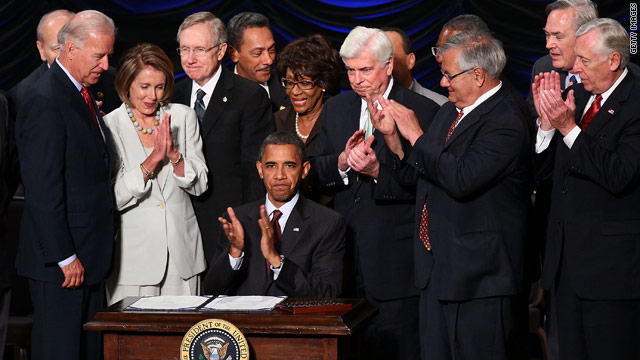 The White House's economic message was largely overshadowed by the forced resignation of a USDA worker that was based on incomplete information.
STORY HIGHLIGHTS

(CNN) -- It was supposed to be a good week for the White House. President Obama would celebrate the passage of Wall Street reform, and Democrats would move toward the midterms with some wind at their backs.

But on a day the president signed the landmark legislation, the narrative from the White House was more contrite than laudatory.

White House Press Secretary Robert Gibbs apologized on behalf of the administration for what former Agriculture Department employee Shirley Sherrod had been through this week and that, to his knowledge, no one from the White House ordered her ouster.

Questions about Sherrod dominated the media briefings in a week the administration hoped would be focused on the most sweeping overhaul of the financial system since the New Deal.

Sherrod was forced to resign because of a misleading video of a speech she delivered at an NAACP event. Conservative blogger Andrew Breitbart posted a portion of an address she gave in which she spoke of not offering her full support to a white farmer. However, it was later determined that her speech, unedited, focused on how the incident changed her outlook and made her realize people should move beyond race.

The NAACP retracted its original condemnation of Sherrod's remarks and issued a statement saying it was "snookered by Fox News" and Breitbart.

Agriculture Secretary Tom Vilsack apologized to Sherrod and offered her a new job.

Video: Who is to blame for Sherrod saga?

"This is a good woman. She has been put through hell," Vilsack said. "I want to renew the commitment of this department to a new era in civil rights. I want to close the chapter on a very difficult period in civil rights."

Sam Fulwood III, a senior fellow at the Center for American Progress, said he thinks the administration's initial reaction was spawned out of fear over how the right-wing media would cover the incident. He said administration officials "allowed themselves to be bullied into doing something without thinking about it."

"The White House, the administration, the Agriculture Department, whomever ... allowed themselves to be bullied into doing something without thinking about it," said Fulwood.

Instead of summoning Sherrod, reviewing the speech and asking what happened, the administration failed to knock down the lies and disseminate the truth, he said.

Fulwood said that Obama's problems stem from opinions being traded as though they are facts. Throughout Obama's time in office, the administration has done a weak job of quashing rumors, such as claims Obama was born in Indonesia, studied at a madrasa and has a forged birth certificate, he said.

"I think if he is able to articulate an honest reaction to these nonsensical stories, they'll be exposed for what they are -- nothing. And that's exactly what the case was with Shirley Sherrod," Fulwood added.

Obama spoke to Sherrod by phone Thursday and expressed his regret about what transpired this week. He further said this misfortune "can present an opportunity for her to continue her hard work on behalf of those in need, and he hopes that she will do so," according to a White House statement.

The call came exactly a year after Obama made a surprise appearance at a media briefing to discuss the controversial arrest of Harvard professor Henry Louis Gates Jr.

The president, Gates and the arresting officer, Sgt. James Crowley, later met for a "beer summit" to discuss the event that sparked a nationwide debate about racial profiling.

The Congressional Black Caucus this week said it's time for a national dialogue on race. Gibbs called the incident "one of those teachable moments" and said that while he was unaware of plans for a broader discussion, he wouldn't rule it out.

John Quelch, professor of marketing at Harvard Business School, said that though the administration should have avoided this situation in the first place, the damage control has been rapid and effective.

As for a national discussion on race, Quelch said it's not an issue the administration is interested in addressing in a high-profile manner right now. But, he said, the White House now must balance "the need to cope with emergency distractions versus the desire to stay on course with the longer-term agenda."

"Obviously the objective is to remove this unscheduled story from media coverage in order to highlight the landmark financial reform legislation," he said.

By Friday afternoon, Obama was trying to get back on message before the weekend. In an event added to the president's schedule Friday morning, he tried to remind Americans what had been overshadowed during the week.

"So, taken together, we made enormous progress this week on Wall Street reform, on making sure that we're eliminating waste and abuse in government and in providing immediate assistance to people who are out there looking for work."