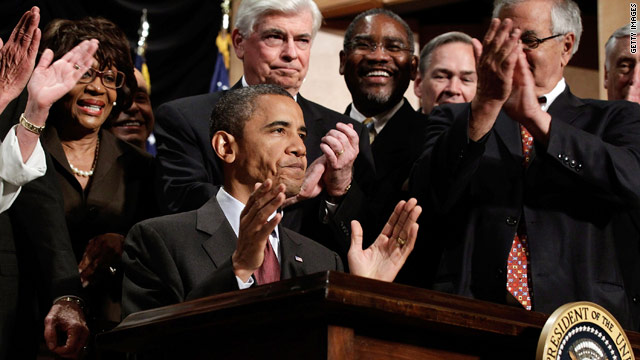 Washington (CNN) -- A legislative win is a win -- but not necessarily when it comes to swaying voters facing the worst economic conditions since the Great Depression.

High unemployment and fears over an ever-increasing federal debt are weighing heavily on Americans. That could drown out President Obama's message as he heads out on the campaign trail to tout Democrats' legislative wins: health care reform, financial regulatory reform and economic stimulus projects, among others.

"Right now he is facing an uphill battle," said Vanderbilt University political scientist John Geer. "I don't think there's much that can be done about that. He'll sharpen the message. But when economies are soft, incumbents have a tough time."

And members of Congress, bracing for a tough election, got a frank assessment Wednesday of where the economy is headed.

Federal Reserve Chairman Ben Bernanke warned that the economic outlook remains "unusually uncertain." But he said that while there are growing signs of weakness in the nation's economic recovery, Bernanke and other top Federal Reserve officials still expect "continued moderate growth, a gradual decline in the unemployment rate, and subdued inflation over the next several years."

In addition to championing Democrats' legislative wins, Obama is being urged to continue to go after Republicans -- and lay out an argument that conditions in the country won't improve if the opposition takes control of Congress after the midterm election.

So far, that strategy is being employed.

"The last thing we should do is go back to the very ideas that got us into this mess," Obama said at the campaign event. "That's the choice you are going to face in November. ... a choice between falling backward or moving forward."

A CNN/Opinion Research Corp. poll would seem to support that strategy, according to CNN Polling Director Keating Holland.

The poll, released in late June, found that Americans are angry at both the Republican and Democratic parties for the economy, but they continue to blame the GOP slightly more than the Democrats for the country's current economic woes.

But that's not necessarily good news for the Democrats, since an anti-incumbent mood tends to hurt the party with more incumbents. Some argue, however, that it suggests 2010 may not be a precise replay of 1994 when Republicans grabbed control of both legislative chambers from Democrats.

"Democrats are saying 'Look, let's make this a referendum on Barack Obama as the future and the Republicans wanting to go back to the past -- and Republicans wanting more of the same policies that got us into the economic mess in the first place,' " CNN Senior Political Analyst Gloria Borger said.

That strategy worked for Democrats in 2006 and 2008, she said, when they told voters change was needed.

"It's a very good decision on [Democrats'] part obviously, because that's the way they get some of those voters back -- particularly, independent white men who are deserting them," Borger added.

Another problem for Obama's legislative campaign tour? That those policies will be portrayed as big-government.

But that is the environment right now. What if the economy were to improve?

"If the economy right now was showing tremendous growth and jobs were being created, he'd have no problem making the argument [for Democrats to be re-elected]. But we're not there right now," Geer said.

Economic conditions are not just a product of policy -- but also the natural economic cycle, he added.

"Ronald Reagan's economy took off in part due to some policies he pursued but also because of natural business cycles just like for Clinton. So there's a lot of it outside the control. Right now, I suspect Obama's getting a little too much of the blame ... we'll see if he is successful."