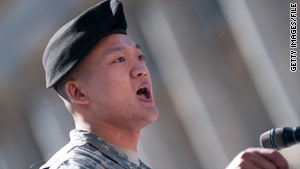 Lt. Dan Choi, here speaking at a March rally in Washington, says he was honorably discharged from the Army.
STORY HIGHLIGHTS

(CNN) -- One of the most outspoken gay critics of the military's "don't ask, don't tell" policy said Thursday that he has been discharged from the Army.

Lt. Dan Choi, who was arrested in March for handcuffing himself to a White House fence in protest of the policy, released a statement saying he had been honorably discharged.

The "don't ask, don't tell" policy bars people who are openly gay or lesbian from serving in the military.

"This is both an infuriating and painful announcement," Choi said. "But my service continues. ... Remaining silent when our family and community members are fired or punished for who they truly are would be an unequivocal moral dereliction that tarnishes the honor of the uniform and insults the meaning of America."

Choi told CNN he received the news through a phone call from his Army National Guard battalion commander. His discharge, however, actually became effective on June 29, according to Eric Durr, a National Guard spokesman.

"You prepare yourself," Choi said. "I built an armor up."

Choi, a 2003 West Point graduate who is fluent in Arabic, was an infantry platoon leader, serving with his unit in Iraq in 2006 and 2007.

He admitted his sexual orientation publicly for the first time last year on MSNBC's "The Rachel Maddow Show," prompting the Army to initiate proceedings to discharge him.

Choi, who lives in New York City, founded KnightsOut.org, an advocacy and education organization of West Point graduates who are gay, lesbian, transgender or bisexual. KnightsOut estimates there are 65,000 gays in the military.

President Barack Obama is pushing for a repeal of the "don't ask, don't tell" policy. A bill that would overturn the measure after a Pentagon review is completed in December is currently before Congress.

More than 12,500 gays have been booted from the military since "don't ask, don't tell" went into effect.