Expert: Tea Party split a distraction but will fade 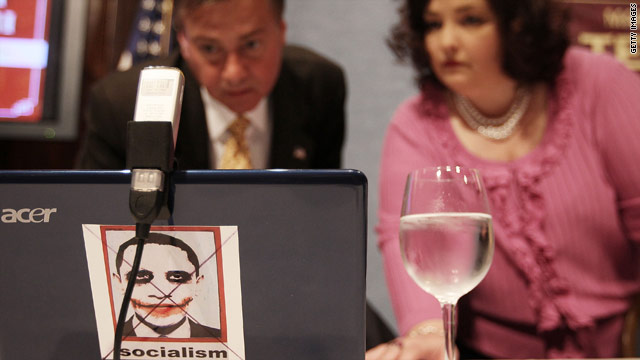 (CNN) -- While an ugly split within the Tea Party might leave a bruise, it won't be fatal to the movement, a political expert says.

Tea Party Express leader Mark Williams made a bad situation worse last week when he blogged what he said was intended to be a satirical letter from NAACP President Benjamin Jealous to Abraham Lincoln after the NAACP had called for the Tea Party to repudiate racist elements in the movement.

By the end of the weekend, the Tea Party Express was cut loose from an organization that claims to represent the entire movement while the Williams group stood by its man.

"This is the worst kind of thing that could happen," said Tom De Luca, a professor of political science at Fordham University in New York City. "They were setting the agenda, at least to some degree, particularly in the Republican Party, so that Republicans all had to take two or three steps to the right."

"You've got the momentum behind you, the wind behind your sails ... and this guy makes these comments and now everybody is talking about that: Is the Tea Party racist?" he said.

Now as Tea Party activists try to move on, they find themselves heading in different directions.

Williams blasted his expulsion as a result of the "stronger egos" of the Tea Party movement trying to take ownership.

Tea Party Nation, a national group that is not a part of the federation, released a statement Monday separating itself from Williams' post and declaring, "The Tea Party Movement is not racist."

Judson Phillips, founder of the Tea Party Nation, said his group had to respond because "this is becoming an issue for the whole movement."

"We are having to react to this quickly because this is the line that the other side wants to hit us with -- that we are all racists. If they can make that story stick, it will destroy the effectiveness of the movement," Phillips said.

"What Mark Williams really needs to do is -- for the good of the movement he says he believes in -- he needs to simply step away," he added.

Williams, however, pointed the finger at David Webb, the spokesman for the federation who announced the expulsion Sunday.

"That careless individual tea partier who assumed the mantel of 'leadership' did so long enough to turn a critical and serious movement and delicate peace with skeptical groups into a World Wrestling style personality conflict with me at the center," Williams wrote in his blog.

The federation was formed in April to provide the Tea Party with a unified message and to promote the movement's objectives, said Paul Steinhauser, CNN's deputy political director.

"The problem is that the movement thrives on being decentralized, and many activists are critical of any moves to anoint a leader or leaders for the Tea Party," he said.

Amy Kremer, chairwoman of the Tea Party Express, said the federation's actions "are not a big deal at all."

"Our goal is not to be part of some club or be part of some good ol' boy network. It is to get true conservatives elected, and we can do that without being a part of the federation," she said.

Kremer said the group she leads in Georgia -- the American Grassroots Coalition -- is one of several to leave the federation voluntarily.

"We're certainly not going to be part of something where a group goes out and attacks other conservatives or conservative groups publicly," she said.

Tea Party Express Coordinator Joe Wierzbicki also downplayed the importance of the federation in a statement.

"Most rank-and-file tea party activists think we're talking about Star Trek when we try to explain who the 'Federation' is, which given the absurdity of their actions is quite fitting, since their action is alien to our membership," he said.

Webb, like Williams, said he is tired of talking about what he sees as a matter soon to be forgotten by voters.

"This is not a split, so the gleeful left can put away the smiles," he said.

The Tea Party Express has earned a reputation as one of the most influential Tea Party groups because of its three high-profile bus caravans and rallies. The group has also become somewhat of a political kingmaker in Republican primaries.

More recently, the organization helped little-known Sharron Angle win the Republican primary in Nevada to face Senate Majority Leader Harry Reid, endorsing her and spending about a half-million dollars on ads for her. The organization says it plans to spend more to help her get elected.

Kremer said the reason the Tea Party Express has come under attack is because of its success.

"The reason we are being attacked is because we are successful; otherwise, they wouldn't care," she said.

De Luca said the real danger is that Williams' blog post tapped resentments against government and perceptions about who government helps that, justified or not, are real.

"You can't just say these things and hide behind the idea that they are satire. It's not funny to a lot of people," he said. "So this is a very ugly underbelly that they had to cut out."