British PM may meet with senators about Lockerbie case 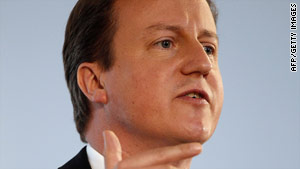 David Cameron is in the United States on his first visit as Britain's leader.
STORY HIGHLIGHTS

Washington (CNN) -- British Prime Minister David Cameron has offered to meet with four U.S. senators Tuesday to discuss the 2009 release of a Libyan man convicted of playing a role in the bombing of Pan Am Flight 103 over Lockerbie, Scotland.

"The prime minister recognizes the huge strength of feeling on this issue and has immense sympathy for the families -- American, British and others -- affected by the Lockerbie atrocity," said Martin Longden, the press secretary at the British Embassy. "The PM has personally asked to rearrange his program in Washington to enable him to meet with the four senators and discuss their concerns directly."

It was not immediately clear if the four senators from New Jersey and New York -- Robert Menendez, Frank Lautenberg, Kirsten Gillibrand and Charles Schumer -- would be able to accept Cameron's invitation to meet with him at the British ambassador's residence in Washington Tuesday evening.

Cameron is in the United States on his first visit as Britain's leader. He's scheduled to meet with President Barack Obama and Senate leaders.

The 1988 bombing of the Pan Am flight killed 270 people, most of them Americans. The flight was headed from Frankfurt, West Germany, to New York via London, England, when it exploded in the air.

Abdelbaset Ali Mohmed al Megrahi was convicted in the case and sentenced to life in prison. The Scottish government released al Megrahi on compassionate grounds last August after doctors said he had terminal prostate cancer and just three months to live.

Al Megrahi is still alive, and news reports in recent days have questioned whether he was as sick as depicted. Questions also have been raised about whether a deal was cut to release him to protect British business interests in Libya.

Cameron has said that al Megrahi's release was "completely and utterly wrong," although the British government played no direct role in the matter. The decision was made by Scottish Justice Secretary Kenny MacAskill.

Under the Scotland Act 1998, Scotland has its own government that is responsible for most of the day-to-day issues there, including the justice system.

The senators released a letter Monday calling for the United Kingdom to launch a full investigation into al Megrahi's release and whether oil giant BP was involved.

In the letter, the senators express concern about correspondence between the British, Scottish and Libyan governments regarding al Megrahi's release to Libya and add, "We have also been dismayed to hear from a BP representative that the company actively lobbied the previous government on behalf of the PTA (Prisoner Transfer Agreement), and media reports suggest BP even tried to address the release of this individual."

Secretary of State Hillary Clinton added her voice to the senators' call for more investigation into the circumstances of al Megrahi's release.

"We are encouraging the Scottish and British authorities to review again the underlying facts and circumstances leading to the release of al Megrahi and to consider any new information that has come to light since his release," Clinton said in a letter to the senators.

Britain's ambassador to the United States, Nigel Sheinwald, said Friday, "Claims in the press that Megrahi was released because of an oil deal involving BP, and that the medical evidence used by the Scottish executive (Scottish Justice Secretary Kenny McAskill) supporting his release was paid for by the Libyan government, are not true."

BP said it did express concern to the British government in late 2007 about the slow progress of a prisoner transfer agreement that Britain and Libya were negotiating, saying it could have had a "negative impact" on British commercial interests.

But the company has denied involvement in any talks with either the British or Scottish governments specifically about al Megrahi's release.