GOP governor's race heats up as Georgians head to polls 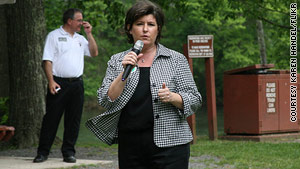 Ex-Georgia Secretary of State Karen Handel leads the pack in a close race for the GOP gubernatorial nomination.

Atlanta, Georgia (CNN) -- As voters in Georgia head to the polls Tuesday in primary elections, surveys indicate the high-profile battle for the Republican gubernatorial nomination appears to be headed to a runoff.

The big question is whether an endorsement by Sarah Palin will turn another female candidate into a nominee.

Last week, the ex-Alaska governor and 2008 GOP vice presidential nominee backed former Georgia Secretary of State Karen Handel for governor. The endorsement appears to have helped propel Handel into the front-runner position in a three-way battle for the GOP nomination.

Handel's support is also up 6 percentage points from a Mason-Dixon poll conducted a few days earlier, when Oxendine's support stood at 31 percent and Handel's at 23 percent. The earlier survey was conducted just before and during Palin's endorsement of Handel a week ago.

On her Facebook page, the former 2008 GOP vice presidential nominee called Handel a reformer who will "strengthen ... families, businesses, state and, ultimately, our United States."

Handel also is up with a campaign commercial that mentions she's the only female candidate in the contest.

Until the new Mason-Dixon poll, surveys stretching back to last year indicated that Oxendine was the front-runner. The race has turned bitter since Palin's endorsement, with a tough new ad from the Oxendine campaign taking on Handel and the Handel and Deal campaigns accusing each other of playing the gender card.

Oxendine was the subject of unflattering investigative pieces about a possible corruption probe in the 1990s. Oxendine was never charged with wrongdoing, and he has insisted that he did not know he was ever investigated, according to The Atlanta Journal-Constitution. And the Handel-Deal war of words has raised their profiles.

Deal was the subject of a congressional ethics probe before stepping down from his House seat in March to pursue a gubernatorial run. He has denied wrongdoing.

If no candidate wins more than 50 percent of the vote, a runoff between the two top vote getters will take place August 10. Georgia Gov. Sonny Perdue, a Republican, has served since 2003 and is prevented by term limits from running for re-election.

"It's been clear for a while that this would be a race to the runoff, and it looks like Palin's endorsement has helped Handel, not only get to the runoff but potentially finish first on Tuesday," said Nathan Gonzales, political editor of the nonpartisan Rothenberg Political Report. "Palin has a following within the Republican Party, and in a multicandidate contest, she can have impact."

In May, Palin endorsed little-known South Carolina state lawmaker Nikki Haley in that state's GOP gubernatorial nomination battle. Palin's backing helped Haley jump from the bottom of the pack to front-runner, according to state polls. Haley ended up coming out on top in South Carolina's June 8 primary, capturing nearly 50 percent of the vote in a four-candidate field. Two weeks later, Haley easily won the runoff election to take the nomination.

The GOP primary winner in Georgia most likely will face off against former one-term Gov. Roy Barnes. Polls suggest that Barnes is the favorite to win Tuesday's Democratic gubernatorial primary over Georgia Attorney General Thurbert Baker.

Barnes appeared to be looking to the general election in a debate over the weekend when he surprised some by saying he would sign an Arizona-style immigration bill.

Perdue defeated Barnes in the 2002 election when the latter was seeking a bid for a second term.