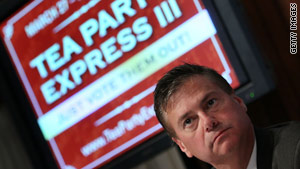 Washington (CNN) -- The National Tea Party Federation, which seeks to represent the Tea Party political movement around the country, has expelled the Tea Party Express because of an inflammatory blog post its leader, Mark Williams, wrote last week responding to criticism from the NAACP.

Even before this current controversy, the group was criticized by some within the Tea Party movement for being run by Republican consultants and for trying to influence GOP primaries far from its base in Sacramento, California.

High profile: The Tea Party Express is one of the best-known groups in the movement because of its three high-profile bus caravans and rallies. Sarah Palin spoke at the beginning of its third caravan, which began in Searchlight, Nevada, and its next-to-the-last stop in Boston, Massachusetts, before it ended with a Tax Day rally in Washington.

More recently, the organization helped little-known Sharron Angle win the Republican primary in Nevada to face Senate Majority Leader Harry Reid, endorsing her and spending about a half-million dollars on ads for her. The organization says it plans to spend more to help her get elected.

The group also targeted incumbent Sen. Bob Bennett in Utah for his vote on the Troubled Assets Recovery Program and helped defeat his bid for a fourth term. It then backed underdog Mike Lee's successful primary campaign and Lee now appears to be a shoo-in to win the general election in November and join the Senate next year.

Political action: The group runs the "Our Country Deserves Better PAC-Tea Party Express.org" political action committee, which was formed in 2008 to help raise money to oppose presidential candidate Barack Obama. It was created by Republican political consultant Joe Wierzbicki, who appears to have come up with the original Tea Party Express cross-country caravan.

What's next?: The Tea Party Express is targeting GOP Sen. Lisa Murkowski in Alaska and has endorsed her little-know primary challenger Joe Miller. It plans a Monday event to announce its support.