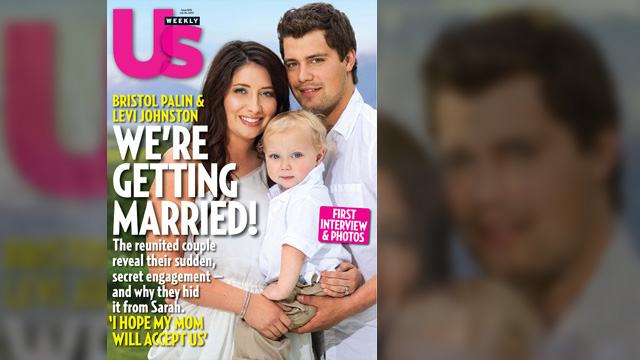 (CNN) -- Bristol Palin and the father of her child, Levi Johnston, are engaged again.

The couple reconciled three months ago during custody discussions about their 18-month-old son, Tripp, Us Weekly magazine reported Wednesday. According to the magazine, the couple said Bristol Palin's mother, former vice presidential candidate Sarah Palin, did not know about their plans until now.

"We got engaged two weeks ago," the magazine quoted Bristol Palin as saying. "It felt right, even though we don't have the approval of our parents."

She acknowledged in the article that "it is intimidating and scary just to think about what her reaction is going to be," adding: "Hopefully she will jump on board."

The Palin family issued a statement later Wednesday that stopped short of a full-throated endorsement.

"Bristol, at 19, is now a young adult," said the statement attributed to the Palin family. "As parents we obviously want what is best for our children, but Bristol is ultimately in charge of determining what is best for her and her beautiful son."

The family statement added that "Bristol believes in redemption and forgiveness to a degree most of us struggle to put in practice in our daily lives."

"We pray that, as a couple, Bristol and Levi's relationship matures into one that will allow Tripp to grow up graced with two loving parents in his life," the statement said.

According to the magazine, Johnston, 20, had no expectations of a reconciliation when he and Bristol Palin got together to discuss custody arrangements involving their son.

"I really thought we were over. So when I went, I had no hope," the magazine quoted Johnston as saying. "I think we both just started talking -- and then we took Tripp for a walk."

Us Weekly Senior Editor Lindsey Powers told CNN's "American Morning" on Wednesday that "they opened up to us about how they had the baby so young and it was really hard for them to work together to raise Tripp."

"But as they got a little bit closer, Bristol moved out of her parents' home to a condo in Anchorage, they got accustomed to parenting and as they worked out a custody plan, they started spending a lot more time together then started realizing they wanted to reunite," Powers said.

The engagement "would fit in with (Sarah Palin's) 'family values' platform," Powers said. "What better than to have your daughter reuniting with the father of the baby and reuniting the family?"

Johnston sent Bristol Palin a text that said, "I miss you. I love you. I want to be with you again" and she was in shock, Powers confirmed to CNN.

"They realized that they're really in love and they're together. And she was thrilled when he popped the question with a one-carat diamond ring," Powers said.

"They say they want it to be quick so, certainly, we'll see them walking down the aisle shortly," Powers added.

Their teenage relationship fell under an intense public spotlight after Sen. John McCain picked Sarah Palin as his vice presidential running mate in August 2008. The couple broke off their first engagement about two months after their son's birth in December 2008.

After they broke up, Johnston posed in Playgirl Magazine and said on "The Tyra Banks Show" that they had been allowed to live together, a charge the Palin camp denied.

During a nasty custody battle last year, Johnston asked that the case be conducted in public to protect him from Sarah Palin, whom he said was "powerful, politically ambitious and has a reputation for being extremely vindictive."

Bristol Palin said in the custody hearing that Johnston wanted a public case so he could "continue to make a spectacle of this custody dispute for his own self-promotion."

Bristol Palin asked that the paternal grandmother be barred from having any unsupervised visitation with Tripp. Her petition said she "may re-offend, keep medications around the house which could be accessible to the baby, have illegal drug users come to the house (or she could take the baby in her car during a drug sale)."

Johnston's response said his mother's "chronic pain condition is currently being managed in coordination with the Department of Corrections."

On July 7, Johnston publicly apologized to the Palin family in a statement to People Magazine, saying some of his comments about the family were not totally true.

"Last year, after Bristol and I broke up, I was unhappy and a little angry. Unfortunately, against my better judgment, I publicly said things about the Palins that were not completely true," Johnston told People. "I have already privately apologized to Todd and Sarah. Since my statements were public, I owe it to the Palins to publicly apologize."