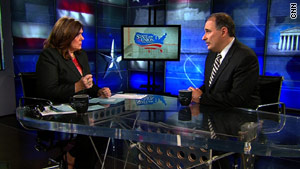 Most Republicans "are not willing to move forward" on immigration reform, David Axelrod said.
STORY HIGHLIGHTS

(CNN) -- Despite cynicism on both sides of the aisle that a broad overhaul of U.S. immigration laws will not happen this year, President Barack Obama continues to push for a bipartisan way forward on the issue, senior adviser David Axelrod said Sunday.

"On immigration, the reality is that the last time this debate occurred in the Senate there were 11 Republicans who joined in, and of course President Bush helped to lead the effort. And most Republicans are not willing to move forward now," Axelrod told CNN's "State of the Union."

Obama gave a major speech on the need for immigration reform earlier this month, but it failed to breathe life into the stalled immigration legislation. He met with members of Congress before and after his speech, and his position is that the bill can only pass with Republican help.

The latest salvo on the imimigration front was a lawsuit filed by the federal government last week challenging a tough new Arizona immigration law. The legislation, set to go into effect later this month, requires immigrants to carry their alien registration documents at all times and allows police to question the residency status of people in the course of enforcing another law. It also targets businesses that hire illegal immigrant laborers or knowingly transport them.

In an interview with CBS's "Face the Nation," Attorney General Eric Holder defended the Justice Department's decision to sue Arizona.

"I understand the frustration of the people of Arizona and the concern that they have with regard to the amount of illegal immigration that occurs, but the solution the Arizona legislature came up with is inconsistent with our federal constitution," Holder said.

New Mexico Gov. Bill Richardson, a Democrat, echoed Holder's view that Arizona's desire to act was understandable, but that it does not justify the law as passed.

"I am sympathetic to Arizona," Richardson said of the neighboring state on "State of the Union." "What I don't agree with is Arizona taking this issue in their own hands and taking over what is a federal responsibility, harming our

foreign policy with Central America and Mexico, and basically passing a law that potentially is discriminatory, racial profiling."

Supporters of the Arizona bill contend that the law does not interfere with federal statutes. Other states currently use a similar protocol, called 287(g), that is designed to have local law enforcement agencies aid federal authorities with immigration enforcement.

"Essentially, Arizona has just codified that in state law," Rep. Trent Franks, R-Arizona, told CNN. "And it's ironic that with all of the arguments that this is somehow about racial profiling, I think the president of the United States has spoken knowing falsehoods about this bill, because the bill itself, in numerous cases, numerous places, outlaws racial profiling. And it's just astonishing."

Opponents of the new law say it would amount to racial profiling, though the federal lawsuit isn't about profiling, but about Arizona allegedly preempting the feds, Franks said.

Another supporter of the Arizona law, California Republican Rep. Brian Bilbray, said on ABC's "Meet the Press" that Arizona's leadership on the illegal immigration front is unsettling to some.

"The problem is that Arizona took a leadership role two years ago, when the United States didn't follow," said Bilbray, chairman of the Republican-dominated Immigration Reform Caucus in the House of Representatives. "Watch out when they say secure the border, because the border is a symptom. The real problem is out-of-control illegal immigration

getting to illegal jobs that are going all the way up to Chicago. But we're looking at the border."