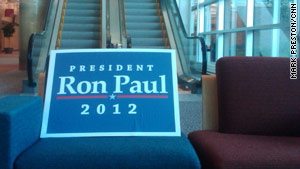 Ron Paul has risen from a little-known congressman to the national spokesman on libertarian philosophy.

Des Moines, Iowa (CNN) -- When Rep. Ron Paul walked into Hy-Vee Hall last month, a single blue sign with a simple message was placed near the escalator that took him upstairs to a fundraiser attended by 300 Republican activists.

The sign was symbolic in many ways: Even as Iowa Republicans are focused on midterm elections, the 2012 presidential contest is not far from their minds. And it was just three years ago that Paul did not receive an invitation to participate in a presidential candidate forum held in this very building.

The sight of the Texas congressman riding the escalator up to address this group of influential Republicans was illustrative of how he has risen from a little-known congressman and afterthought presidential candidate to the national spokesman on libertarian philosophy.

All of this comes from a man who has no illusions that he can win his party's presidential nomination, but that won't stop him from running again in 2012 if he decides to do so.

"It is probably hard to believe, but I look at it a little bit differently than others," Paul said in an interview during his recent visit to Iowa. "I don't expect to be president. I don't expect to be. That doesn't mean I won't run for president, but I am really energized when I think we make inroads ... to broaden the outreach on the philosophy I have been talking about for 40 years."

His advocacy of limited government, disdain for the Federal Reserve and belief that the U.S. should withdraw its troops from Afghanistan has attracted an eclectic following of young people, anti-war activists and those wary of government intrusion.

Paul began his 2008 White House run as a third-tier candidate, a gadfly with little support and even less money. Paul was never considered a serious frontrunner for the GOP nomination, but an explosion of support in the fall of 2007, fueled by online contributions, carried him into Iowa. There, he received 10 percent of the vote in the caucuses. He officially ended his presidential campaign in June 2008, well after Sen. John McCain had received enough support to win the Republican nomination.

"I don't ever take personal credit as much as being in the right place at the right time and maybe saying the right things," Paul said. "I have said the same things for 30 years when it came to financial bubbles. See, the business cycle theory is what motivated me to get into politics."

On this night in Des Moines, Paul stuck to his talking points. He never mentioned a possible presidential run in 2012. Instead, Paul spoke of limited government and the need for government officials to follow the Constitution, which just so happened to be the theme of the Iowa GOP's fundraiser. Paul's address was bookended by standing ovations.

"I have been excited about and what he is talking about," John Bowery, a Republican from Shenandoah, Iowa, said after Paul's speech. "I am sorry he didn't get more attention in 2008. I don't know if he is going to run in 2012. If someone like him does, I will be all for it."

Paul is an enigma in the Republican Party. He champions less government and a socially conservative philosophy, which would seem to play well with GOP base voters such as Bowery.

Yet Paul, who was the Libertarian Party's presidential nominee in 1988, doesn't embrace the Republican brand. Party leaders and the GOP establishment types are not so smitten with him either. This is problematic in a presidential run, where well-oiled political machines are needed in key states to help build support and get-out-the-vote efforts in primaries and caucuses.

He does credit the Republican Party for sharpening its focus on the economy, but he doesn't speak in terms of "we" but rather "they."

"I think that the Republicans have, whether it is out of merit or accidental, they are in a good position right now mainly because they have talked about economics," Paul said. "And their talk is good about watching the spending and watching the deficits and people are concerned about runaway government."

But Paul does express some skepticism that GOP promises of reforming Washington and cutting government might just be talk.

"I think they have the subject right, and they talk about it," he said. "I think where they are going to come up short maybe not before the election, but afterwards.

Last month's trip to Iowa was his third to the state since November 2009, so it begs the question: Is Paul trying to lay the groundwork for a 2012 White House run?

"I am very serious about thinking about it all the time," Paul said about his possible presidential aspirations. "My answer is always the same thing: You know I haven't ruled it out, but I have no plans to do it."

For now, Paul will continue to travel the country to promote his philosophy, while his 2008 presidential campaign operation has morphed into the Campaign for Liberty, a 500,000-member organization that promotes libertarian views.

Paul also has a small political action committee that doles out contributions to "liberty-based candidates," a spokesman said.