Kagan: Military recruiting controversy dogged her as dean at Harvard 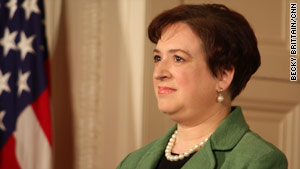 In a 2003 e-mail to students, Elena Kagan said the military recruitment policy is "a moral injustice of the first order."
STORY HIGHLIGHTS

Washington (CNN) -- Shortly after Elena Kagan left the White House in 1999 to teach at her alma mater, Harvard Law School, the nationwide controversy over military recruiting on campus had just begun to heat up.

Kagan and fellow academics had actively sought to block military recruiters from Harvard because of the Pentagon's "don't ask, don't tell" policy on removing openly homosexual service members. Kagan later supported other schools challenging a federal law -- known as the Solomon Amendment -- requiring that recruiters be given equal access or face the loss of federal funding. The Supreme Court unanimously upheld the law on March 6, 2006.

Just four months after taking the job as Harvard's dean, in October 2003, Kagan offered students her thoughts in a campuswide e-mail, saying that to give recruiters equal access to the campus "causes me deep distress. I abhor the military's discriminatory recruitment policy." She called it "a profound wrong -- a moral injustice of the first order."

The same week as the high court's 2006 ruling in favor of the military, a top Pentagon official wrote colleagues in an internal memo of the department's efforts "to limit the polarizing nature of the anti-Solomonites who now rattle sabers over an intent to shout down the military."

William Carr, then deputy undersecretary for military personnel policy, noted, "Dean Kagan is a case in point because she reportedly 'encouraged students to demonstrate against the presence of recruiters ... (and) to express their views clearly and forcefully.' Not a true fan of 'equality and scope' it would appear."

In Rumsfeld v. FAIR, the high court unanimously upheld the Solomon Amendment. "A military recruiter's mere presence on campus does not violate a law school's right to associate, regardless of how repugnant the law school considers the recruiter's message," said Chief Justice John Roberts.

Before that ruling, the issue at Harvard was how much access to allow the recruiters. Kagan sought to have campus visits coordinated by student veteran groups, not the Career Services office, and wanted the military not to appear alongside civilian recruiters. Negotiations with the Pentagon and Harvard continued for years, with frustration expressed by both sides.

Documents released by the Pentagon over the weekend show that overall, Kagan's involvement was minimal and that the ultimate decision allowing military access was made by the school's president, Larry Summers. But the memos show the two apparently clashed over the issue.

"The materials produced by the Department of Defense provide further documentation that military recruiters were never barred from the campus of Harvard Law School, neither before Elena Kagan became dean, nor during her tenure," Leahy said in a written statement. "The unfair charge made by some that Elena Kagan broke the law as dean continues to have no basis in law or fact."

But the panel's ranking member, Sen. Jeff Sessions R-Alabama, has been very outspoken over Kagan's handing of the "don't ask, don't tell" controversy.

"Don't ask, don't tell was created and implemented by President Clinton. Where was her outrage during the five years she served in the Clinton White House? Why would she blame the military? They didn't pass the rule. It was Congress and the president," Sessions said. "Instead of taking a stand in Washington, Ms. Kagan waited until she got to Harvard and stood in the way of devoted, hardworking military recruiters."