Kagan: Will she be a reliable liberal on the bench? 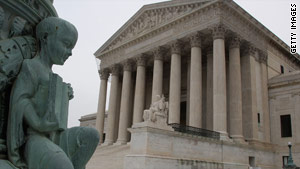 Elena Kagan has no judicial record that conservatives or liberals can easily fall back on when debating what kind of justice she would be.
STORY HIGHLIGHTS

Washington (CNN) -- Ideology is hard to characterize, particularly in judicial candidates who presumably are not disposed to view the law with a strictly political lens. The term "reliably conservative" or "reliably liberal" may be the best a president can hope for when considering candidates for the Supreme Court.

Elena Kagan has no judicial record that conservatives or liberals can easily fall back on when debating what kind of justice she would be.

As a White House lawyer and policy wonk in the mid- and late-1990s, she was involved in a number of hot-button issues such as late-term abortion, gun rights, affirmative action, and tobacco regulation. Memos from her government service reveal a politically pragmatic, cautious lawyer, whose views for the most part mirrored the president's. She comes across as a mainstream liberal, with little desire to passionately argue strong positions on contentious issues.

Kagan "is someone who was well known in the Obama White House," said Thomas Goldstein, a top Washington lawyer and founder of scotusblog.com. After working in the Clinton White House, she "was put in a position where she could be nominated when President Obama made her the solicitor general, who represents the United States in the Supreme Court. She has a lot of fans on the right as well as the left from her time as the dean of Harvard Law School. So it's someone who is an intellectual, who has a lot of respect, is young, a woman, and doesn't generate a significant political fight."

Obama and the left certainly hope Kagan will rule much as did her predecessor, Justice John Paul Stevens, who has become the undisputed leader of the court's unofficial liberal wing.

But such choices can backfire. Take the case of Earl Warren. He was California's governor and a rival of Dwight Eisenhower in the Republican presidential primaries of 1952. Warren eventually dropped out of the race and threw his support to the retired general. As political payback and to court Western conservatives, Ike selected Warren as chief justice in 1953, despite Warren's lack of judicial experience.

Warren's once-conservative views soon moderated, and under his leadership, the Supreme Court established a lasting liberal record, particularly in civil rights, due process and individual protections. Eisenhower later called the selection "the biggest damn-fool mistake I ever made."

Two words have recently entered the political lexicon: to "Souter" and to "Bork"-- named after Supreme Court choices, one successfully nominated, the other a political casualty. They have come to represent how judicial candidacies can take on a life of their own.

Conservatives in 1990 cheered the retirement of William J. Brennan Jr., a liberal thorn to them for three-and-a-half decades. The first President Bush's choice of Souter to replace Brennan came as a complete surprise. His legal record was sparse, and few knew where he stood on key issues. He was labeled the "stealth nominee" and there was bipartisan hand-wringing over what he would do on the bench.

The country soon found out, as Souter has carved a mostly moderate-liberal position.

That evolving centrist stance has outraged conservatives, and they vow never to be caught off guard with another nominee. To that end, extensive, almost obsessive vetting of potential candidates has now become common. Groups of all political stripes compile massive dossiers, ready to use the information as political weapons. To "Souter" has come to mean to name a candidate without knowing much about him.

Robert Bork had the opposite problem. His paper trail was extensive. He was an outspoken and prolific jurist with a clear, unapologetic conservative record. He would have succeeded Lewis Powell, a centrist and the court's key swing vote.

Liberals realized a Bork victory would immediately tip the bench rightward. His confirmation hearing was the most bitter Washington had seen in years, and he was ultimately rejected by the Senate 58-42, the largest margin of defeat ever for a court nominee. To "Bork" has since come to mean to wage a partisan fight against judicial nominees.

A major sore point in Kagan's Senate hearings may be a 1995 law review article she wrote on past judicial confirmations. She said the process had taken on "an air of vacuity and farce," since senators shy away from "the essential rightness -- the legitimacy and the desirability -- of exploring a Supreme Court nominee's set of constitutional views and commitments."

Kagan had been hired by then-Senate Judiciary Chairman Joe Biden to help Democrats on the panel prepare for Ruth Bader Ginsburg's confirmation in 1993. Her experience prompted her belief the hearings were a "vapid and hollow charade."

Kagan also praised Bork's hearings as a model of substance, of candid give-and-take between nominee and senators. Subsequent hearings, she believed, especially the 1991 confirmation hearing of Clarence Thomas, had become a "national laughingstock." The hearings for Ginsburg and Stephen Breyer were "lovefests" in which they "stonewalled the Judiciary Committee to great effect."

Many senators may rightly ask why Kagan would not be more forthcoming on her views on hot-button issues and constitutional interpretation.

Unlike most past presidents, Obama has called upon his experience as a constitutional law professor to spell out the kind of justice he'd like to see, using "empathy" as a key barometer.

"I will seek somebody with a sharp and independent mind and a record of excellence and integrity," he said in May 2009, just before he chose Sonia Sotomayor. "I will seek someone who understands that justice isn't about some abstract legal theory or footnote in a case book; it is also about how our laws affect the daily realities of people's lives -- whether they can make a living and care for their families; whether they feel safe in their homes and welcome in their own nation."

He has cited Ginsburg and Breyer as two justices he admires. Not surprisingly, they are the only two on the current court named by a Democratic president.

As for Kagan, some left-leaning groups are worried she could prove to be not as advertised. Her views on executive authority in particular have raised some eyebrows. As chief defender of the administration's anti-terror strategy, Kagan has articulated a more robust defense of the White House than many civil rights and human rights groups would like.

"There's a real concern about Solicitor General Kagan with respect to national security issues," said Vincent Warren, executive director of the Center for Constitutional Rights, which has defended dozens of prisoners held at the military prison at Guantanamo Bay, Cuba. "We do know from how she addressed the issue at her confirmation proceedings, and I certainly can't see anything that would lead me to believe that she would have a less expansive version of what executive power is than certainly the current form, and certainly with respect to how George W. Bush viewed it. So I think there's a real concern for human rights groups."