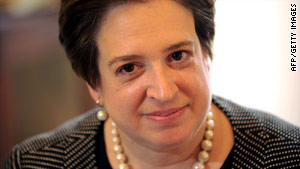 That office -- run by the Justice Department -- defends congressional legislation and executive actions in appeals before the Supreme Court. The first case she argued in person before her once and future colleagues was a blockbuster: Citizens United v. Federal Election Commission, in which she defended the government's restrictions on corporate spending in federal elections.

Kagan argued the case in a special sitting of the court September 9. The issue hinged on whether corporations' ability to pour money into election campaigns could be strictly regulated, or whether they have free-speech rights to spend their cash to influence elections, just like individual donors do.

She ultimately lost the case when the high court, by a 5-4 ruling, gave big business, unions and non-profits more power to spend freely in federal elections, threatening a century of government efforts to regulate the power of corporations to bankroll American politics.

A number of conservatives praised the ruling as a victory for First Amendment free speech rights; most Democrats blasted it, arguing that it would tilt the political landscape in favor of Republicans and traditional GOP allies in the business community.

Obama referenced the case when he publicly introduced his high court nominee in April. He praised Kagan for defending "bipartisancampaign finance reform against special interests seeking to spend unlimited money to influence our elections." He added, "I think that says a great deal not just about Elena's tenacity, but about her commitment to serving the American people."

During the September arguments, Kagan urged the justices to take a go-slow approach and not roll back current restrictions. Several conservative members did not seem impressed by her suggestion.

Justice Antonin Scalia expressed doubts that Congress can best craft campaign finance reform. "We are suspicious of congressional action in the First Amendment area precisely because we -- at least I am -- I doubt that one can expect a body of incumbents to draw election restrictions that do not favor incumbents. Now is that excessively cynical of me? I don't think so."

Kagan replied that, "in fact, corporate and union money go overwhelmingly to incumbents. This may be the single most self-denying thing that Congress has ever done," in imposing restrictions on their own members accepting such donations.

But Kagan ran into trouble when she said the "government's answer has changed" since March, when the case was first argued, drawing nervous laughter in the courtroom. At that time, another Justice Department lawyer had suggested that books and Internet expression could be banned by the government, just as broadcast TV election ads.

Justice Samuel Alito wondered how far that would extend -- perhaps to free DVDs, signs, printed text of TV ads or candidate documentaries. "I have no idea where the government would draw the line with respect to the medium that could be prohibited," he told Kagan.

"Isn't it extraordinarily paternalistic for the government to take the position that shareholders are too stupid to keep track of what their corporations are doing," he added, adding that current restrictions on corporations spending their general treasury funds on election ads amounted to "Big Brother" heavy-handedness by the government.

In its January ruling, the court concluded, "When government seeks to use its full power, including the criminal law, to command where a person may get his or her information or what distrusted source he or she may not hear, it uses censorship to control thought."

Justice Anthony Kennedy added, "The First Amendment confirms the freedom to think for ourselves."

The issue is now back before Congress, and many members have promised to keep strong restrictions in place, while satisfying constitutional concerns.

There is wide disagreement over whether the positions Kagan argued on behalf of the government reflected her personal views. Past solicitors general -- both conservative and liberal -- on June 22 offered their support for Kagan, saying she served her job with distinction. They said she would be fair and impartial when deciding cases, and not feel an allegiance to any president or political agenda.