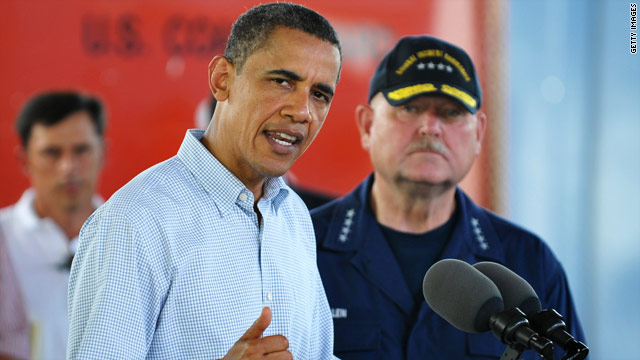 (CNN) -- Here are some sound bites from the post-racial era:

"The long legged Mac Daddy in the White House is angry this morning. Seems to me we should change the name to the Black House for the next few years. Your news organization obviously is very racist."

"I don't care what anyone says. If Obama takes to heart the calls for anger in this crisis all bets are off! White America will dump him right on his black a#s."

Last week, CNN published an article entitled "Why Obama doesn't dare become the 'angry black man' " after critics complained that President Obama had not displayed enough anger in response to the Gulf of Mexico oil disaster.

The article quoted scholars on race relations who said many white Americans would be unsettled by Obama losing his temper because he would evoke the stereotype of the angry African-American man.

Reader response was massive, and angry -- with about 3,800 comments and 8,800 Facebook shares. Some readers said they've never even heard of the stereotype. Others said they'd lived it.

This piece disgusts me-- could you be any more racist against both whites and blacks?
--CNN.com reader

Several said that even talking about the stereotype perpetuated racism.

The undercurrent in most comments from readers was race-fatigue. People seemed to be saying, "Can't we just stop talking about race and see ourselves as Americans?"

The venom in readers' reactions didn't surprise William Jelani Cobb, author of "The Substance of Hope: Barack Obama and the Paradox of Progress." He calls Obama "America's Mandela," but says even inspirational political figures can't erase the nation's ugly racial past.

"He's a president, he's not an antidote," Cobb said.

Video: Obama is not 'antidote' for racism

Perhaps the best antidote is to not even talk about the stereotype, one reader suggested:

"This may be the most racist rubbish I've ever seen on CNN. And it's geared towards the president! What disrespect! Why would CNN repeat the very wrong stereotype of the 'angry black man'? CNN, you just proved you are the KKK at its highest level!! >:( ."

The article even provoked some testy exchanges:

"This is what CNN considers news? Trying to drum up some racial tension and polarize our people even further? Take this race bait and toss in the garbage."

"CNN didn't drum up racial tension. Yes, this is news. White people always seem offended and then go into denial when the issue of race comes up."

Another reader thought the article's focus could have been broadened:

"How racist -- what about the angry white man? I'm white and angry." (Most commenters did not identify their race.)

Several readers thought the angry black man stereotype was fabricated. They were puzzled by the phrase and its meaning. They saw no difference between a white president displaying anger and a black president doing the same.

"I've spent 75 years in the U.S. and I have never heard the racist phrase 'angry black man,' " one reader said.

iReporter: Obama can't get angry because of his race

The phrase comes as no surprise to Rainier Spencer, director of Afro-American Studies Program at the University of Nevada-Las Vegas.

Spencer said the angry black man stereotype has its origins in slavery. During slavery, white men feared black men like Nat Turner who resisted slavery. They were the black men who led slave insurrections and were sold further South. They were called Bucks.

"There's the image of the minstrel, the happy, silly Negro who is fun to watch and laugh at. But the other one -- the Buck -- is the one you have to be careful about," Spencer said.

But Spencer said the angry black man stereotype doesn't have the bite it once had. Certain black male public figures -- Obama, Colin Powell -- can display anger.

"Bill Cosby could be angry and if what he's angry about is reasonable, it doesn't scare white people," Spencer said.

Yet some black readers of the CNN article said the stereotype still stings and shapes their lives.

"That's what white America fears the most, 'An Angry Black Man,' " one reader said. "As a black man in America you learn to internalize, because no matter how far you go, you're always thought of as black first (or inferior).''

"Why are they saying white people want Obama to get more angry? We all know how 'folks' get when black people get angry LOL. That's why we have that saying, 'Don't make me act my color.' These people (media and politicians) do not want to see a black man angry while running a country.''

Why do we have to talk so much about race?

But who says a black man is running the country?

Some readers got miffed because CNN identified Obama as a black president. He's biracial, they say.

"CNN get your facts straight -- he is an angry half-black man! CNN you are a bunch of idiot race-baiters."

"Maybe the 50 percent white part of him keeps the 50 percent angry black part calm and collected and on an even keel. Hmmm, that might be worthy of a university study! Could be ground-breaking science here! I'll bet the guvment' would even pay for it!"

Spencer, the race scholar from UNLV, said that Obama has already made his identity choice. He identified himself as black on his census form. He is perceived and accepted as black my most African-Americans.

Obama's racial background doesn't make him unlike most blacks; it makes him similar to most blacks, Spencer said.

Spencer, who is writing a book on mixed race, said an estimated 90 percent of African-Americans have white ancestors, including Michelle Obama, the first lady.

"It doesn't make sense to talk about mixed race unless you're going to include all 30 million African-Americans," said Spencer, author of the upcoming book, "Reproducing Race: The Paradox of Generation Mix."

Perhaps the media can't get a handle on Obama's identity because they aren't in touch with their own prejudice, one reader said.

At least one reader said critics in the media calling for Obama to show more emotion aren't aware that their calls reflect prejudice.

"They hate him because he isn't living up to their stereotypes. They hate him no matter what he does because he represents change and this country is afraid of change lately. Most of the tea baggers are saying they are taking 'back' our country. That is white man talk for going backwards instead of forwards."

The debate triggered by the article spilled all over the political spectrum. But beneath many comments was a desire to move beyond race.

"Why is CNN so race obsessed? Black in America part 27! Nobody cares about this stupid crap until they bring it up. The tiny slither of Americans that are racist against blacks are so small and insignificant it just isn't worth mentioning."

Spencer, the UNLV scholar, said many Americans may want to move past race, but they don't want to do the hard work required to make that transition.