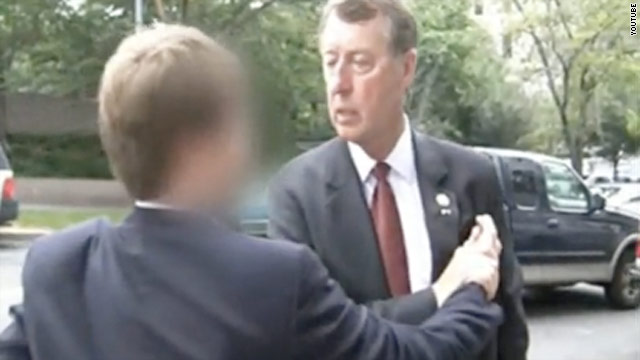 Washington (CNN) -- North Carolina Rep. Bob Etheridge reiterated his apology Monday after an online video surfaced showing he was involved in a physical altercation with two young men who approached him on a Washington street and asked the Democrat whether he supported President Obama's agenda.

"The truth is I had a long day, it was the end of the day, almost sunset," he told reporters on Capitol Hill. "But that's not the issue. The issue is I apologize for my actions and the people of North Carolina know me well and I apologize to these young men as well."

Etheridge declined to say whether more words or actions were exchanged beyond those that were shown in the edited video posted anonymously online Monday.

"I've been spat at, pushed on and threatened before and that's no excuse for my not walking on by," Etheridge said while declining to disclose if more words were exchanged. "Just no excuse."

The six-term congressman also said he still does not know who the young men -- who identified themselves as students in the video -- are.

Etheridge is shown in a video getting into a physical confrontation with the men.

"Who are you?" a clearly frustrated Etheridge replies when the two men approached Etheridge with a camera on a Washington street. When the purported students did not answer, Etheridge is seen slapping the camera out of one of the individual's hands.

Later in the video, which has clearly been edited, Etheridge is seen grabbing the wrist of one of the men and again repeatedly asking, "Who are you?...Tell me who you are."

"We are just here for a project," one replies. "We are just students, that's all we are."

In the video, currently posted on the website of Andrew Brietbart -- a conservative commentator and online news aggregator -- the students' faces are obscured and they never fully identify themselves or their affiliation.

"I have a right to know who you are," Etheridge says, still firmly gripping the man's wrist. The Democrat then briefly grabbed the individual's neck before letting him go.

Etheridge has represented North Carolina's second congressional district -- located in the central part of the state -- since 1997. He was re-elected in 2007 with 67 percent of the vote.