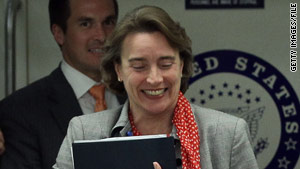 Arkansas Sen. Blanche Lincoln was one of the noteworthy winners in Tuesday primaries around the U.S.
STORY HIGHLIGHTS

(CNN) -- In a night of many winners and more losers, Arkansas Sen. Blanche Lincoln stood out Tuesday for successfully overcoming an aggressive, multimillion-dollar campaign by national unions and liberal interest groups who desperately sought to slap a pink slip in this Democrat's hands.

No walking papers were issued to Lincoln, who led a small group of major winners -- dominated by women -- to emerge from Tuesday's primaries. There was also a handful of losers, who probably woke up Wednesday morning wondering what hit them.

A snapshot of winners and losers from Tuesday's primaries:

• Sen. Blanche Lincoln: Labor and liberals had hoped to make an example of Lincoln, who proved over the years that she was not always a reliable Democratic vote, certainly not so on union issues. But this double barrel of labor and liberals failed to send Lincoln to the head of the unemployment line, and she now has five months to make her case for six more years in Washington.

Her win will likely help boost the confidence of some centrist Democrats fearful of facing the wrath of the emboldened liberal activists in the Obama era. But the unions are expressing no remorse in trying to defeat a Democrat. The AFL-CIO and SEIU both issued statements proclaiming that their efforts were a success, even if they didn't win.

"Taking a two-term incumbent in deep red Arkansas into a runoff, and coming within few thousand votes of her ... is a virtually unprecedented achievement," AFL-CIO President Richard Trumka said in a statement. "If working families were able to accomplish this in Arkansas, imagine what they can achieve in other states.

Undoubtedly, the unions and the liberal interest groups that opposed Lincoln will come under fire from fellow Democrats for dedicating millions of dollars to try to defeat a Democrat when that money could have been used to try to beat a Republican in November. Don't expect these groups to concede that this was a mistake, because they are an important financial and grass-roots constituency for the Democratic Party.

• Nikki Haley: After enduring more than two weeks of accusations of infidelity, South Carolina state Rep. Nikki Haley nearly walked away with the 50 percent of the vote needed to avoid a runoff in the Republican gubernatorial primary. Not one, but two men have claimed to have had extramarital affairs with Haley, who deftly maintained her composure and denied the allegations. The voters responded.

Haley gained more votes than the current state attorney general, a congressman, and the lieutenant governor. Haley's campaign, once considered a long shot, gained steam in the closing months, and it received a boost when Sarah Palin endorsed her.

Haley must now face Rep. Gresham Barrett in a runoff scheduled to take place in two weeks. But there is pressure already on Barrett to leave the race. The Republican Governors Association issued a strongly worded statement Tuesday night congratulating Haley.

"The voters of South Carolina made a clear choice in Nikki Haley, notwithstanding the possibility of a runoff," RGA Executive Director Nick Ayers said. "The outcome is all but certain.

"Nikki Haley withstood a barrage of innuendoes and slurs in the closing days of the primary season and persevered to the finish with dignity, determination and confidence.

"Moreover, receiving half of the votes against two other statewide incumbent Republicans and a sitting Congressman speaks volumes of her strength as a candidate and bodes very well for her in the General Election. We congratulate Nikki for her grit and determination."

The anti-establishment candidate appears to be attracting support from the establishment. It will be telling to see who endorses Haley's candidacy on Wednesday.

For the Tea Party, it is the second major win in the past few weeks. Rand Paul defeated the establishment candidate in the Kentucky GOP Senate primary last month. And the Club for Growth has another feather in its cap by helping nominate a Republican candidate who champions limited government. The question on Wednesday is whether Lowden or Tarkanian would make a better general election candidate against Reid. Definitely a water-cooler debate.

• California's CEOs: Meg Whitman and Carly Fiorina turned impressive resumes in the business world into Republican tickets for the November show. Whitman, the former eBay CEO, spent more than $71 million of her own money to ensure that she defeated rival Steve Poizner in the race for California's Republican gubernatorial nomination.

She did so handily and will now use her millions to try to defeat state Attorney General Jerry Brown in November. As for Poizner, the state insurance commissioner dipped into his own pockets for $25 million in his losing bid for the nomination.

Fiorina, the former Hewlett-Packard CEO, beat out conservative Assemblyman Chuck DeVore and centrist former Rep. Tom Campbell for the right to challenge Democratic Sen. Barbara Boxer in November. And Boxer and Fiorina are wasting no time attacking one another in what will very likely be a brutal and expensive general election campaign.

Expect Republicans to highlight Whitman and Fiorina as new faces of the GOP.

• Gov. Jim Gibbons: Wasn't Blanche Lincoln supposed to lead the loser column? Instead it is the Nevada governor, who failed to convince Republican voters that he deserved a shot at a second term. He is the latest incumbent to fall at the hands of fed-up voters. It is no surprise that Gibbons, who had some personal scandals and a very messy divorce, lost the GOP primary to former federal Judge Brian Sandoval.

• Rep. Bob Inglis: Inglis, R-South Carolina, is fighting for his political life after he failed to win Tuesday's primary. He must now compete in a runoff with Spartanburg prosecutor Trey Gowdy that is scheduled to take place in two weeks. If Gowdy wins the runoff, Inglis would be the third House incumbent to lose re-election this year.

How could two -- potentially three -- major Republican officeholders lose to a state representative, who until recently was a long-shot candidate to win the nomination?

$25 million in a losing bid for California governor? Ouch!