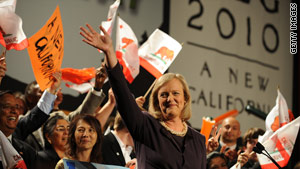 "It has been a tough campaign, but I'm a stronger candidate tonight because of it," she said. "I'm battle-tested now. And I'm ready to give Jerry Brown the toughest election fight he's faced in his 40 years of politics."

Whitman poured more than $71 million of her own funds into the primary race and has said she was prepared to put in as much as $150 million to win the office. Whitman ran a hard-hitting media campaign in an effort to paint Poizner as liberal, and is expected to continue this aggressive approach with Brown. He easily captured the Democratic nomination.

"To serve again would be a deep honor," said Brown, who added that he would be the best equipped to help solve the state's economic troubles.

Whitman immediately went on the attack saying that when Brown was governor, state spending and unemployment increased.

Whitman, who came under assault from Poizner for not supporting Arizona's controversial immigration law, sought to run a moderate campaign. In recent weeks, public polling showed that she was leading in the race. The former eBay CEO emphasized her business background as key to helping the state solve its unemployment and deficit problems. She has been criticized for dealings she had with Goldman Sachs and for failing to vote in elections for several decades.

In the contest for Senate, former Hewlett-Packard CEO Carly Fiorina easily captured the GOP nomination. She defeated former Rep. Tom Campbell, and Assemblyman Chuck DeVore. Campbell was considered a centrist Republican, while DeVore was the favorite of many Tea Party activists in the state.

Fiorina, who was running on a conservative platform, will face three-term Democratic Sen. Barbara Boxer, who some political analysts say is vulnerable in this difficult year for incumbents. Fiorina and Boxer already started criticizing one another in recent days as it became increasingly clear that this would be the fall match-up.

Fiorina accused Boxer of not having the right economic solutions to help the state as well as being too liberal. "In her 28 years as a career politician in Washington, D.C., Barbara Boxer is a bitter partisan," Fiorina said Tuesday night. "Barbara Boxer is the perfect example why we must return to citizen government."

Boxer sought to highlight Fiorina's troubled tenure at H-P during an interview with CNN. "Before she got fired she fired 30,000 people, sent their jobs to India and China," Boxer said. "That is tough for her. That is a record she has."

If Fiorina or Whitman wins in November, it would be the first time a Republican woman won a state-wide contest in California since 1970.

The election, which saw a very light turnout, was marked by a large number of mail-in ballots, which is an increasingly popular method of voting in the state.

Also, California voters on Tuesday approved an initiative that would overhaul how primaries for statewide and Congressional elections are run in the state. Instead of candidates from each party running in separate primaries and the winners facing off in a general election, Proposition 14 would have all candidates run together in a first round of voting. The two top vote getters would then compete in the general election.

Supporters of Prop 14 include Schwarzenegger and the lieutenant governor who argued that the measure would open up the process by giving voters more choice by not restricting them just to party line choices. In a strange bedfellow type of situation, this proposition united both political parties in opposition saying voters' choices would be limited and it would give more power to special interests.