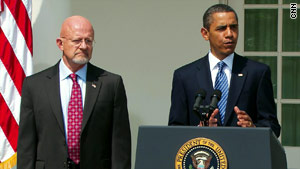 Washington (CNN) -- Calling him one of America's "most experienced and most respected intelligence professionals," President Barack Obama has nominated Air Force Lt. Gen. James Clapper to be the new director of national intelligence.

"He possesses a quality that I value in all my advisers, a willingness to tell leaders what we need to know, even if it's not what we want to hear," said Obama. He made the announcement in the Rose Garden with Clapper on Saturday.

Clapper, who retired from the Air Force in 1995 after a 32-year career, served as head of the National Geospatial-Intelligence Agency from September 2001 to June 2006.

Clapper, now a top Pentagon intelligence official, would replace Dennis Blair, who resigned at the end of last month. Obama said he'll be looking for Clapper "to ensure that we have the most capable and efficient intelligence community possible."

If confirmed, Clapper will become the nation's fourth DNI in the last five years. The position was created after the September 2001 terrorist attacks to oversee the 16 agencies of the U.S. intelligence community.

Obama said he's indicated to other Senate leaders that the confirmation should be carried out "swiftly."

"The Senate has voted to confirm Jim for senior positions on four separate occasions, and each time it has done so overwhelmingly," he said.

"This nomination can't fall victim to the usual Washington politics."

Some political observers have indicated that Clapper's prospects for confirmation on Capitol Hill, however, are questionable.

Intelligence Committee Chair Sen. Dianne Feinstein, D-California, recently said the "best thing for the U.S. intelligence community is to have someone with a civilian background in charge."

Senate Intelligence Committee Vice Chairman Kit Bond, R-Missouri, said he has reservations about Clapper. "I believe he is too focused on the Defense Department issues and he has tried to block out efforts to give more authority to the DNI," Bond argued.

Bond's counterpart on the House side, Rep. Pete Hoekstra, R-Michigan, also said he believes Clapper is the wrong person, because he is "not forthcoming, open or transparent" with Congress.

But Obama said: "Jim also understands the importance of working with our partners in Congress. As he has said, not merely to appear when summoned, to keep Congress informed and seek members' consent."

Blair, a retired admiral, was pressured to resign as DNI because of differences with the White House over the scope of his role and turf wars with CIA Director Leon Panetta and other members of the intelligence community. One source familiar with Blair's situation said that from the very beginning, "the White House did not have the same view (as Blair) of what the DNI should be."

Panetta, in a statement Saturday, said, "Few people have more intelligence experience than Jim Clapper. The men and women of the CIA look forward to working closely with him in his new role to strengthen America's national security."