Voters could make history in Alabama 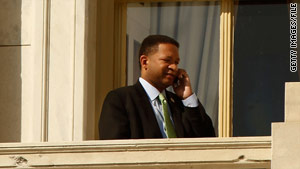 (CNN) -- Three states -- Alabama, Mississippi, and New Mexico -- hold primaries Tuesday, and voters could make history in one of those states.

Gov. Bob Riley, a two-term Republican, is prevented from running for re-election.

New Mexico also holds gubernatorial primaries Tuesday. Five candidates are battling for the GOP nomination. The winner will face off in November against Lt. Gov. Diane Denish, who is unopposed in the Democratic primary. Gov. Bill Richardson, a two-term Democrat, is prevented from running for another term in office.

Mississippi does not hold an election for governor until next year and neither New Mexico or Mississippi have contests for U.S. Senate this year. In Alabama, Republican Sen. Richard Shelby is considered safe as he seeks a fifth term in office.

The GOP primary in Alabama's 5th Congressional District is capturing national attention. Rep. Parker Griffith made national headlines late last year by switching his party affiliation from the Democrats to the GOP. But he now faces primary challenges from two fellow Republicans, who label him a flip flopper for his party swap.

In Mississippi, Angela McGlowan is trying to become the first black Republican member of the House since J.C. Watts. The conservative political strategist, who was an analyst on Fox News, has been courting Tea Party activists. She and longtime state Sen. Alan Nunnelee are part of a three-way contest for the GOP nomination in Mississippi's 1st Congressional District.

The winner will face off in November against Rep. Travis Childers, a conservative Democrat who's held the seat for two years.