Who wants to be U.S. intelligence chief? 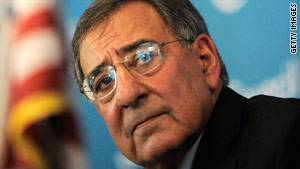 Washington (CNN) -- Now that Dennis Blair has packed his bags after 16 months as the nation's chief intelligence officer, finding a new director to lead the 16 agencies of the intelligence community is turning out to be a tough sell.

CIA Director Leon Panetta is a top choice of the Obama administration for the new director of national intelligence, said administration officials, but with three directors coming and going within five years, some, including Panetta, appear wary of the position.

Panetta would likely face little opposition on Capitol Hill. Key congressional leaders who would have to sign off on a new DNI have been singing his praises. Panetta had been a controversial choice to lead the CIA because of his lack of intelligence related experience. However, intelligence committee leaders on both sides of the aisle have singled Panetta out for his leadership at the CIA and working closely with Congress.

But Panetta is "very happy" at the CIA, finds the job "rewarding and challenging" and has told the White House he has no interest in becoming the director of national intelligence, said a U.S. intelligence official, who did not want to be named because he was not authorized to talk about the issue.

Another prominent name on the list is retired Lt. Gen. James Clapper, the current undersecretary for intelligence at the Defense Department. But his prospects appear pretty dim on Capitol Hill.

Intelligence Committee Chair Sen. Dianne Feinstein, D-California, said the "best thing for the U.S. intelligence community is to have someone with a civilian background in charge."

"I believe he is too focused on the Defense Department issues and he has tried to block out efforts to give more authority to the DNI," said Bond. Bond's counterpart on the House side, Rep. Pete Hoekstra, R-Michigan, also believes Clapper is the wrong person, because he is "not forthcoming, open or transparent" with Congress.

Blair, a retired admiral, was pressured to resign as DNI because of differences with the White House over the scope of his role and turf wars with CIA Director Panetta and other members of the intelligence community. One source familiar with Blair's situation says from the very beginning, "the White House did not have the same view of what the DNI should be."

That might be the crux of the problem. The law that created the position of DNI after the 9/11 terrorist attacks is too "ambiguous," said one of the key people who pushed Congress for intelligence reform. Lee Hamilton, the co-chairman of the 9/11 Commission, told a congressional hearing last week that "the role of the DNI is not clear ... and as long as you have the ambiguity, you're going to have these agencies fighting for jurisdiction and power."

The DNI needs to be empowered with the budget and personnel authorities to lead the community, otherwise, the director is merely a coordinator, Hamilton said.

Some question whether it is possible to change the law, considering the difficulty Congress had in getting the original agreement.

Sen. Bond said Congress must act to give the DNI clear budget authority and chain of command within the intelligence community. Sen. Feinstein has called on the president to define the DNI role and then work with Congress to make it law. Hamilton said a fix is needed now, that it can't wait for the longer-term legislative correction.

Rep. Hoekstra says changing the law is not the answer. "If you have great people working together, even in a mediocre structure, they can make things happen. More strengths and authorities in the law doesn't guarantee success," said Hoekstra.

There does seem to be widespread agreement on one needed component: Presidential action in support of the DNI. Hamilton said the "burden is on the president now to clarify who is in charge of the intelligence community -- where the final authority lies on the budget, personnel and other matters."

Rep. Bennie Thompson, the chairman of the House Homeland Security Committee, wrote a letter to President Obama on Friday urging him "to remove obstacles which may have formed a stumbling block for others who held the DNI position."

John Brennan, the president's chief counterterrorism adviser in the White House, said earlier this week that the administration is trying to ensure the intelligence community is "integrated well and orchestrated well" by the DNI.

"We want to make sure the DNI's role is clear and is able to optimize the contributions that the intelligence community makes on a daily basis," said Brennan.

Brennan is "the real DNI," said one former senior intelligence official, who did not want to be named talking about intelligence matters. A DNI needs three things, said the official: an artful management approach, the full support of the president, and a good relationship with the CIA director.

Rep. Hoekstra said there are two ingredients: technical competence to lead and build the intelligence community; and the confidence and ear of the president.

One intelligence official, who did not want to be named because he was not authorized to talk about the open position, said it's not enough to have a solid intelligence background to be DNI -- the person "needs to be politically savvy."

And who would make good candidates? Hoekstra said Rep. Jane Harman, the former ranking Democrat on the Intelligence Committee would make an excellent choice. He pointed to her extensive knowledge of the intelligence community and her role in drafting the 2004 intelligence reform bill. He also thought Sen. Joe Lieberman, I-Connecticutt, the chairman of the Senate Homeland Security and Governmental Affairs Committee should be considered for the job.

But the people CNN talked to kept referring to one person: Leon Panetta.

Hoekstra said he would support going back to Panetta one more time to see if he can be persuaded to take the job. The former senior intelligence official said Panetta "has all of the juice" to run the intelligence community. And Sen. Bond maintained Panetta is the only person "who has the horsepower" to be DNI.

But, Bond added, "Anybody in their right mind would turn the job down."