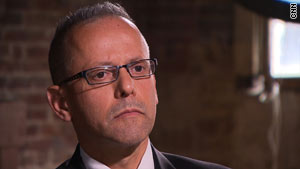 See why a former ATF deputy director thinks he was a victim of retaliation from his own agency on tonight's "AC360" 10 p.m. ET

Dublin, California (CNN) -- For the first 19 years of his career, Vince Cefalu spends most of his time in the field as a special agent for the Bureau of Alcohol, Tobacco, Firearms and Explosives.

But those days are over.

Now, he just sits in his office in Dublin, California, all day, and by his own admission, does virtually nothing. He said it's punishment for complaining and ATF's way of forcing him to quit. CNN gave him a camera to document five days at work.

"After several transfers, suspensions, attempts to terminate me, attempts to attack my credibility and my reputation, the end game was to assign me to this position," Cefalu said.

Five years ago, Cefalu was the lead agent on a racketeering case and complained to his supervisors about what, he says, were plans for an illegal wiretap. ATF disputes his claim and says he's had disciplinary and performance issues.

But since then, he says, ATF has made his life miserable. He has filed a series of grievances and complaints related to his job, which is now overseeing ATF property.

"For years, Edgar Domenech had been part of the machine that had created this circle of destruction, the self-promotion of the senior managers, with all the perks, and using the agency for the personal playground," Cefalu said.

But, in an ironic twist, Domenech himself claims he was the victim of retaliation.

He told CNN the bureau turned on him after he reported that former ATF director Carl Truscott, his then-boss, was wasting money on the new $207 million ATF headquarters in Washington. His complaints became public after an inspector-general's investigation confirmed the overspending.

"I pretty much felt that my value had just been discarded, and that was very demoralizing," Domenech said. "There is a fraternity. There is a brotherhood, sisterhood, sense of family, and I saw my family -- a good number of them -- walk away from me, because they didn't want to get caught up in whatever was going to happen to Edgar, because nobody knew what was going to happen next."

Domenech, who has won numerous awards during his 25-year career at ATF, said: "I won't let the actions of Mr. Sullivan and the way that associates have treated me, dictate when I leave this job. ATF still has the best men and women doing one of the hardest jobs in law enforcement. As a special agent in charge of the Washington field division, I am an advocate for the men and women in Washington field division and I will continue to be their advocate until I don't believe I can bring that value to them, then I'll decide to do something else or retire. But I will not allow how I've been treated, dictate my terms of when I say it's been fun but I've got to go. That's just not going to happen."

Asked about Cefalu, Domenech said: "I wish Vince nothing but the best."

He added: "I can sympathize with them and I know there are folks who accuse me and blame me for their ills and all I would say is that in any proceedings that have been taken against me, there has not been one where I have been found to have done anything in error or where I've been wrong."

Cefalu said if Domenech could be the victim of retaliation, then it could happen to anybody.

"He was the second highest guy in the bureau," Cefalu said. If he cannot feel comfortable and strong enough and have enough power and position to confront unethical conduct in the government, why should I?"