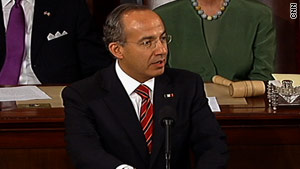 Washington (CNN) -- Mexican President Felipe Calderon addressed two of America's most contentious political issues during a speech to the U.S. Congress Thursday, asking for a return of the assault weapons ban and blasting Arizona's controversial new immigration law as a "terrible" endorsement of racial profiling.

Calderon also reminded Americans of their role in the recent eruption of drug-fueled violence along the U.S.-Mexican border, noting the high demand for illegal drugs in the United States. At the same time, he highlighted a series of economic reforms undertaken by his administration, arguing that they are helping to position Mexico for a period of greater growth and social stability.

"Mexico and the United States are stronger together than they are apart," he told a joint meeting of Congress. "Our economic ties have made both economies stronger. ... A stronger Mexico means a stronger United States."

Calderon is the second Mexican head of state to address Congress in the past decade, following President Vicente Fox in 2001. His appearance came on the heels of Wednesday's high-profile meeting and state dinner with President Obama at the White House.

The contentious issue of Arizona's immigration law has been a key issue for Calderon during his U.S. visit. The measure, which will allow law enforcement officers to ask for proof of legal residency of anyone who is being investigated for a crime or a possible legal infraction, has drawn widespread criticism in Mexico.

"I strongly disagree" with the measure, Calderon told members of the House and Senate. "It is a law that not only ignores a reality that cannot be erased by decree," but also introduces the "terrible idea" that racial profiling is acceptable.

Calderon also had a message for undocumented Mexican migrants currently in the United States: "I want to say to the migrants -- all those who are working really hard for this great country -- that we admire them, we miss them, [and] we are working hard for their rights ... [and] for their families," he said.

Calderon pointed out that Mexico has created more than 400,000 jobs so far in 2010 -- the highest, he claimed, ever generated in a four-month period in his country. He said he is hopeful that an aggressive economic reform agenda -- including pension reform and greater infrastructure investment -- would eventually persuade more Mexicans to pursue opportunities closer to home.

"I'm not a president who likes to see Mexicans leave our country, leaving for opportunities abroad," he said. "Mexico will one day be a country where our people will find the opportunities that today they look for outside of the country."

Until then, he said, it is the responsibility of both the American and the Mexican governments to repair a "broken, inefficient" immigration system. He called on Congress to pass a comprehensive immigration reform law, arguing that it is a crucial component of a more secure border.

Turning to the explosion of drug-related violence, the Mexican leader asserted that his government is working to "firmly establish the rule of law." It is deploying "the full force of the state" against organized crime, he declared.

"Restoring public security will not be easy and will not be quick. It will take time ... [and] will take human lives as well," he said. But this is "a battle that has to be fought." Drug violence claimed 6,500 lives in Mexico last year. Officials say that roughly 90 percent of the cocaine smuggled into the United States moves through Mexico, which is also a gateway for marijuana and other illegal drugs.

Calderon pointed out that the challenge to Mexican security has "roots on both sides of the border." He cited the high rates of consumption of illegal drugs in the United States, and praised the Obama administration for its recent initiative to lower demand.

He also urged Congress to re-impose the assault weapons ban, asserting that violence in Mexico spiked after the ban was lifted in 2004. Mexican authorities in recent years have seized 45,000 weapons that could be traced to the United States, he said, and there are now roughly 7,000 gun shops along the U.S. border with Mexico where assault weapons can be easily acquired.

Saying he respects the U.S. Constitution and understands "the purpose of the Second Amendment," he added, "believe me -- many of these guns are not going to honest American hands."

"Today these weapons are aimed by the criminals ... at Mexican civilians and authorities," he said. "With all due respect, if you do not regulate the sale of these weapons in the right way," American authorities and civilians may be soon face a similar challenge.

CNN's Charley Keyes and Alan Silverleib contributed to this report.