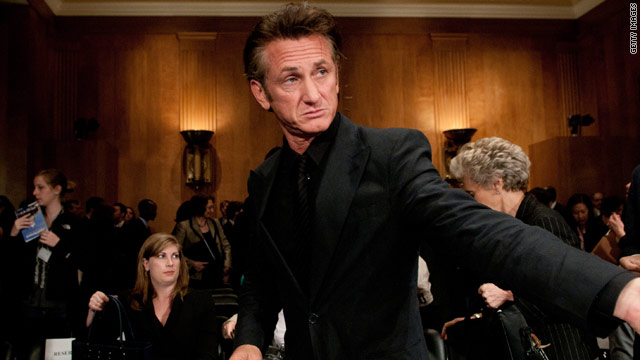 (CNN) -- Sean Penn could have been walking the red carpet at the Cannes Film Festival. Instead, he was under the Capitol Dome in Washington on Wednesday to testify about Haiti.

Penn's newest film, spy thriller "Fair Game," will debut Thursday at Cannes, but the day before, the Oscar-winning actor was seated before the Senate Foreign Relations Committee as witness to an emergency.

"I come here today in the hope that we will address with bold clarity the razor's edge upon which Haiti lies," he said.

He called on lawmakers to demand transparency as the island nation moves forward in recovering from the massive earthquake that struck January 12.

"In an emergency, donors offer money and expect it to be spent helping people," Penn said. "I hope we are here today to encourage just that."

Penn, who founded the J/P Haitian Relief Organization, has been living in a tent in Port-au-Prince, helping manage one of the devastated capital's largest camps for the displaced.

The actor turned aid worker testified with experts and policymakers before a committee headed by Democratic Sen. John Kerry, co-sponsor of a bill that would authorize $3.5 billion to help rebuild Haiti over the next five years.

About $10 billion in aid was pledged for Haiti over the next 10 years at a donors conference in March. Kerry said donor nations "must now follow through and deliver the funds they have promised in a coordinated manner, and Haiti must work to improve its capacity to absorb the aid it receives."

Former USAID Administrator Andrew Natsios offered a scathing assessment of the challenges that lie ahead in rebuilding what he called a failed state.

He compared Haiti's devastation and massive death toll of more than 200,000 to that of Chile, which suffered a stronger quake in late February but was not as badly affected.

"I think the worst thing we can do is be nice about this and live in a Disney World assessment of what we are dealing with," Natsios said. "We are dealing with one of the worst-governed countries in the world."