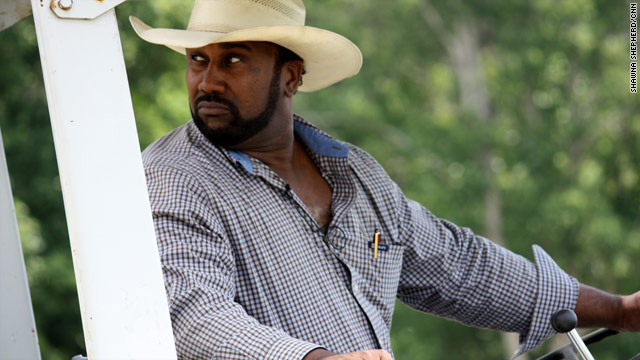 Farmer on a mission
STORY HIGHLIGHTS

Mecklenburg County, Virginia (CNN) -- On his southern Virginia farm on a recent warm Saturday, John Boyd Jr. needs a dose of rain before he can plant soybeans.

More than 200 miles away in Washington, Boyd has a bigger problem on his hands. President Obama has promised to help black farmers who have not received the $1.25 billion settlement owed to them after years of being denied government farm loans and support from federal programs because of the color of their skin.

"This is not about us complaining, this is about the government not doing what they promised they were going to do time and time again," Boyd said.

The 1997 case against the U.S. Agriculture Department, Pigford v. Glickman, was settled out of court 11 years ago but tens of thousands of farmers missed the filing deadline to submit claims.

As a senator, President Obama sponsored a measure in the 2008 Farm Bill that reopened the case, known as Pigford II.

In February, the Obama administration brokered a $1.25 billion settlement for Pigford II, but Congress missed a March 31 deadline to fund it. Another deadline, May 31, approaches.

Once a week for more than a decade, Boyd trades his work boots and jeans for a suit to make the drive to Washington. Boyd will not receive a payout from the settlement. It's his job as president of the National Black Farmers Association to lobby on behalf of those eligible to get what's owed to them.

Video: Where is the settlement money?
RELATED TOPICS

Boyd is particularly upset the president has not been more vocal about the issue. The lobbyist is blunt about saying the issue of race is complicating the White House response.

"I do think that the administration doesn't take it head-on because it's solely a black issue," Boyd said. "How can you get away [from] race on this issue where we were discriminated against by the Federal government?"

White House officials insist race is not a factor and say they're eager to get the money into the hands of the farmers.

"The president's approach to this is not based on the color of skin but because of what is right," White House Press Secretary Robert Gibbs said.

But the farmers say they just can't wait much longer. People such as John Moses Bonner are literally dying off. The Virginia farmer recently passed away at the age of 87 without ever getting the money the government owed him.

Boyd spoke at Bonner's memorial service in Dinwiddie, Virginia, and afterward said, "It really hurts to be here and have to deliver a message at Mr. Bonner's going home services that Congress failed to act."

Under the terms of a process overseen by a federal judge and dating to 1999, qualified farmers could receive $50,000 each to settle claims of racial bias. In addition, U.S. Agriculture Secretary Tom Vilsack has said those farmers may pursue a claim for actual damages from the bias, and potentially receive up to $250,000.

If Congress misses the May 31 deadline, the farmers may withdraw from the class-action settlement and pursue independent litigation against the government. Boyd hopes it won't come to that.

"The black farmers don't have their money and the person to grieve to is the president, a black president that has been supportive in the past," Boyd said. "We need him to help us finish the job. I don't think Congress is going to do it on its own without the president from the microphone saying he would like to see black farmers get justice from the government."