After 30 years in D.C., Specter ousted by voters 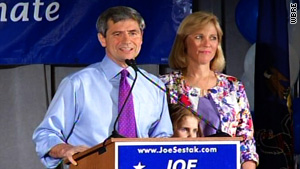 Washington (CNN) -- Sen. Arlen Specter is on his way out of office after serving 30 years on Capitol Hill, losing Tuesday in the Democratic primary for his Senate seat to Rep. Joe Sestak.

"Congratulations, Congressman Sestak," Specter tweeted shortly a brief public speech. "You have my support for the general election."

"Some want to go back to the failed policies of George Bush," he said. "Letting Wall Street do whatever it wants or just say no to progress. On the other hand, I think we know we're in pretty tough times, but we know that we can go forward, we know that we must go forward. But to do so we need a public servant, not a politician."

He then complimented Specter and his long public service.

"We disagreed about a number of things, but we're Americans," he said. "But he has done good things for Pennsylvania."

In his public remarks, Specter thanked his family and campaign staff.

Video: Joe Sestak: 'This election is for you'
RELATED TOPICS

Sestak, a retired Navy admiral, launched a longshot bid to dethrone one of Pennsylvania's most powerful political figures in recent time. But public polling shows that Sestak surged as Specter fell.

The winds of anti-incumbency blew into Pennsylvania over the past few weeks, and Specter watched his once-commanding lead over Sestak disappear.

Why the weather analogy? Because there hasn't been a member of Congress who has had a more stormy 12 months on Capitol Hill than Specter, the gruff and unpredictable Pennsylvania Republican-turned-Democrat who is known in Washington and beyond as "Snarlin' Arlen."

Specter is 80, but for Democrats in 2009 he was the new 60, the parliamentary crowbar Democrats needed to help muscle President Obama's policies past Republican opposition in the Senate.

Specter's decision to abandon the GOP in April 2009 effectively gave Democrats that 60th vote. Democrats would have to wait until the contested Minnesota Senate race was resolved in early summer, but that was more of a formality. Democrat Al Franken's victory over GOP Sen. Norm Coleman in Minnesota handed Democrats the 59th vote -- it was Specter's defection that made the GOP by and large powerless.

With Specter's loss, expect a major storyline Wednesday to be whether Obama has lost his golden political touch. His track record of late has not been so good.

And while Obama resisted heading to Pennsylvania on a late rescue mission for Specter, he was still tied to this newly minted Democrat, and Republicans were itching to highlight it.