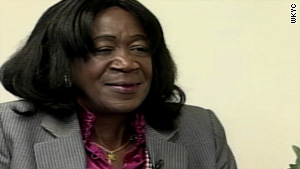 Zeituni Onyango, pictured in 2009, is the half-sister of President Obama's late father. She is a native of Kenya.

Washington (CNN) -- President Obama's aunt from Kenya can stay in the United States, a U.S. immigration judge has ruled, ending a six-year-plus legal battle over her status.

Judge Leonard Shapiro made the decision Friday, court officials said. Two government sources confirmed Monday that the ruling will give legal status to Zeituni Onyango, 57, allowing her to remain in the country.

Onyango's attorneys held a press conference on the matter Monday afternoon in Ohio.

Onyango, who is the half-sister of the president's late father, applied for political asylum in 2002 due to violence in her native Kenya. She was a legal resident of the United States at the time and had received a Social Security card a year earlier.

Onyango's asylum request was turned down in 2004. She appealed the rejection of her request twice but was denied each time and ordered to leave the country.

Onyango remained in the country illegally until April 2009 when Shapiro gave her permission to stay in the United States while he considered her case.

In February, Onyango arrived at an immigration court in a wheelchair and testified before the judge for more than two hours, her representative, Amy Cohn, told CNN at the time.

Two doctors, including her personal physician, also testified on her behalf. Onyango's medical condition was part of her legal defense against expulsion.

White House officials said during the appeals that Obama was staying out of the matter.

"The president believes that the case should run its ordinary course," an official said.

Onyango's immigration status came to light in the final days of the 2008 presidential race.