Palin to Obama: 'Do your job, secure our border' 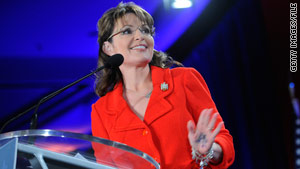 "It's time for Americans across this great country to stand up and say 'We're all Arizonans now and, in clear unity, we say Mr. President, do your job, secure our border,'" Palin said, standing beside Brewer at a Saturday afternoon press conference.

Brewer used the event to announce her first appointment to the state's new Joint Border Security Advisory Committee and the launch of a Website to combat what she said was a national misinformation campaign about the state's new law.

Palin and Brewer, both Republicans, decried plans by opponents of the new law to boycott the state in protest.

Video: Is Arizona ban too subjective?

Passed in April, the law requires immigrants in Arizona to carry their registration documents at all times and allows police to question individuals' immigration status in the process of enforcing any other law or ordinance.

Critics say it will lead to racial profiling, while supporters deny that and say it is needed to crack down on increasing crime involving illegal immigrants.

President Obama has criticized the Arizona law, saying that in dealing with the immigration issue, "the answer isn't to undermine fundamental principles that define us as a nation."

"You can imagine if you are an Hispanic American in Arizona, your great grandparents may have been there before Arizona was even a state, but now suddenly if you don't have your papers, and you took your kid out to get ice cream, you're gonna be harassed," Obama said, referring to the statute at a April rally in Iowa.

"That's something that could potentially happen," he said. "That's not the right way to go."

Brewer signed a package of changes to the law shortly after it passed that she said addressed concerns about profiling, though critics said the changes made little difference.

Palin joined Brewer on Saturday in denying the statute would lead to racial profiling.

"I think for most American people the reaction to that would be, 'Why aren't (police) already doing that?'" the former Alaska governor said.

"And while Mexico's president has begun to crack down on the violent drug cartels and corruption in his own country," she continued, "It's time for the United States government to enforce the rule of law as well."

Brewer also took jabs at Obama and the federal government.

"Our border is being erased and our president apparently considers it a wonderful opportunity to divide people along racial lines for his personal political convenience," she said.