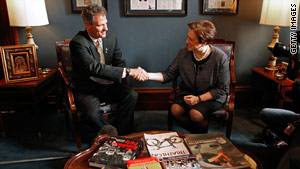 Kagan has been strongly criticized by GOP leaders for her efforts to block military recruiters from Harvard University during her time as the school's law school dean because of the military's "don't ask, don't tell" policy. The policy, opposed by President Obama, prevents gays and lesbians from serving openly in the armed forces.

Top Republicans have also highlighted the fact that Kagan has never served as a federal judge, something that distinguishes her from all nine current members of the high court.

If party moderates break from the GOP leadership on these issues, it dramatically increases Kagan's chances of overcoming a possible filibuster and winning confirmation as the country's 112th Supreme Court justice.

Massachusetts GOP Sen. Scott Brown -- who broke the Democrats' 60-member filibuster-proof majority by winning the late Ted Kennedy's seat in January -- said after meeting with Kagan that he is satisfied she supports members of the military.

"It was the first question I actually asked her because, having been in the military, I had concerns about [her] position at Harvard," Brown said.

While dean at Harvard Law, Kagan said she "abhorred" the military's "discriminatory recruitment policy." She called it "a profound wrong -- a moral injustice of the first order."

Kagan supported other schools' challenges to a federal law requiring that recruiters be given equal access or face the loss of federal funding. The Supreme Court unanimously upheld the law in 2006.

Earlier in the day, Maine GOP Sen. Susan Collins said she doesn't have any concerns about Kagan's experience. She also said she didn't see any "extraordinary circumstances" that could lead her to join a potential filibuster against Kagan.

Collins said that Kagan told her she considers Roe vs. Wade, the 1973 ruling establishing a constitutional right to abortion, to be settled law. Kagan herself has remained tight-lipped when asked such questions from reporters.

The support of Brown and Collins alone, combined with a unified Democratic caucus, would be enough to ensure Kagan's confirmation.

Specter said Kagan may be open to the idea of allowing television coverage of Supreme Court hearings.

"She said it'd be helpful to the public and to the court," he said. "This was the best answer I've gotten" from any recent Supreme Court candidate.

Specter is a staunch advocate of allowing television cameras into the high court. Most justices, however, have adamantly opposed the idea.

Specter also said Kagan stood by comments she made in 1995, when she dismissed the confirmation hearing process as a "charade."

Kagan's meeting with Specter attracted considerable attention because of his political troubles. Specter -- who is facing a tough primary fight next week -- voted against Kagan for solicitor general before switching from the Republican Party to the Democratic Party.

Specter has not said how he will vote on her Supreme Court nomination. Some political observers have speculated that his previous opposition to Kagan, combined with an unwillingness to immediately back her now, could undercut his support with stalwart Democrats. A quick declaration in favor of Kagan, on the other hand, could strike some voters as political opportunism.

Obama nominated Kagan on Monday to replace retiring Supreme Court Justice John Paul Stevens. If confirmed, she would become the third woman on the current nine-member bench and the fourth woman in the court's history.