Analysis: U.S. has no choice but to work with Karzai, for now 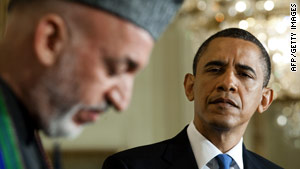 Washington (CNN) -- Six weeks ago in Kabul, President Obama struggled to find something positive to say about his host, Afghan President Hamid Karzai. U.S. National Security Adviser James Jones was far less diplomatic, saying his boss wanted Karzai to understand "that in his second term, there are certain things that have not been paid attention to, almost since Day One."

That frosty visit was followed by weeks of hostility between Washington and Kabul, during which Karzai made a string of anti-Western comments.

He blamed the West for corruption in Afghanistan, accused the U.S. and its allies of fraud in the election that kept him in power and even threatened to join the Taliban if the international community continued to pressure his administration.

An incensed White House threatened to cancel this week's visit. Yet there were no visible tensions Tuesday when Hillary Clinton welcomed Karzai to the State Department for several days of talks including military, defense, diplomatic and intelligence chiefs from both countries, and meetings with President Obama.

The secretary of state focused on the "long-term commitment" of the U.S. to Afghanistan, praised Karzai's efforts toward fighting graft and gently urged more. Karzai talked of a "steady and mature" relationship, a "joint venture" and "partnership." Tension, he said, is a sign of a mature relationship. Both sides made clear their disagreements would not affect the important relationship between the two countries.

We've been here before.

In November Hillary Clinton flew to Afghanistan to attend Karzai's inauguration for a second term in an effort to show the United States was ready to move past months of tension over what was widely viewed as a flawed election. The trip also was intended to accept him as the rightful leader of Afghanistan and a partner with whom Washington could work.

As U.S. and NATO troops gear up toward a major offensive this summer in the southern Kandahar province, Washington's strategy in Afghanistan hinges more than ever on presenting a credible alternative to the Taliban.

So this latest, not-so-subtle attempt to kiss and make up, to move beyond bitter recriminations and resentments and present a united front would be encouraging, if only the sentiment behind it were true.

The Obama administration still doesn't trust Karzai. In private, U.S. officials view him as impervious to the sacrifices the United States has made for his country and whose lack of credibility among his people poses the biggest threat to U.S. success against the Taliban.

For his part, Karzai sees American involvement in Afghanistan as being driven solely by national interests. He is concerned -- and many Afghans fear -- the United States will abandon the country once it starts pulling out troops in July 2011, just as it cut off funding and support after the war that drove out the Soviets in the 1980s.

Karzai wants the United States to demonstrate that it's there for the long haul. And he needs its support for his efforts toward political reconciliation with the Taliban, a plan still in its infancy that the U.S. wants to help shape.

The ups and downs: A rocky U.S.-Karzai relationship

Since Karzai's re-election, U.S. influence on him has been limited. Karzai does depend on the international community for troops and aid, but he is far more dependent on political allies at home who kept him in power and are loath to implement the kind of reforms Washington is demanding.

The United States has made the calculation that its regular public flogging of Karzai has only backfired, leading to the Afghan president's criticisms of the U.S. effort.

The focus now, officials say, is on the "relationship" between the two countries rather than personalities. This week the two sides will begin to map out a "strategic partnership" that looks beyond the dynamics of the insurgency to how the United States and Afghanistan will cooperate going forward. Officials from both countries are meeting on issues like economic development, agriculture, political reconciliation and building functioning Afghan ministries. U.S. officials see encouraging signs and say they're optimistic that if they let Afghans implement their own strategy for rebuilding the country, accountability and transparency will follow.

But a key root of the word "partnership," is "partner." When U.S. Ambassador to Afghanistan Karl Eikenberry was asked this week whether Karzai was a reliable partner, he would only say that Karzai was the elected leader of Afghanistan and an "ally."

What Eikenberry really means is ... the United States doesn't have a choice but to work with Karzai, because he's the elected leader. So, for now, the U.S. wants to help him be the "best Karzai he can be," as one official put it. That means continuing to push his government for transparency and accountability, while supporting Afghanistan with development and security assistance, even after troops are gone.

But it also requires recognition that Karzai is not the only game in town and his political support throughout the country, never very strong, continues to weaken. This means the United States will need to strengthen efforts to work directly with other Afghan leaders, local partners and tribes -- maybe even with the Taliban, which continues to gain strength.

U.S. ties to Afghanistan are larger than Karzai and Obama and will exist long after they have left the political stage. Washington and Kabul need a relationship built on shared interests of the present and future, rather than the personal grudges of the past. The best hope for that is for the U.S. to continue to develop the country and the institutions, rather than place its hopes on developing its current leader.