Bill aims to strip certain Americans of their citizenship 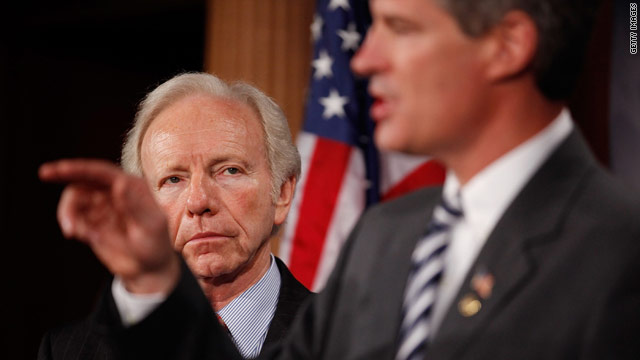 Punishing the enemy within
STORY HIGHLIGHTS

Washington (CNN) -- A bipartisan group of legislators on Thursday introduced legislation in Congress to strip citizenship from any American found to be involved in terrorism.

If the Terrorist Expatriation Act passes, an American would lose citizenship if found to have provided material support or resources to a foreign terrorist organization -- as designated by the secretary of state -- or participated in actions against the United States.

Sens. Joe Lieberman, I-Connecticut, and Scott Brown, R-Massachusetts, co-sponsored the bill. An identical bill is being introduced in the House by Reps. Jason Altmire, D-Pennsylvania, and Charlie Dent, R-Pennsylvania.

"As the attempted terrorist attack on Times Square showed us again, our enemies today are even more willing than the Nazis or fascists were to kill innocent civilian Americans [in WWII]," Lieberman, chairman of the Senate Homeland Security Committee, told reporters. "Our enemies today are stateless actors who don't wear uniforms and plot against Americans abroad and here in the United States."

Faisal Shahzad, an American citizen, recently admitted driving a Nissan Pathfinder into New York's Times Square on Saturday and attempting to detonate the vehicle, which was packed with gasoline, propane tanks, fireworks and fertilizer, according to a complaint filed Tuesday in U.S. District Court in New York.

Lieberman said the legislation updates the 1940 Immigration and Nationality Act, which identifies seven categories in which citizens can lose citizenship if they voluntarily perform one of the acts.

Brown, a member of Lieberman's committee, said the bill isn't a knee-jerk reaction. "This reflects the changing nature of war and recent events," he said. "War has moved into a new direction."

Brian Fallon, a spokesman for New York Sen. Chuck Schumer, said he believes "it would be found unconstitutional in this context and would also be ineffective."

House Minority Leader John Boehner has similar worries, saying the chances of the bill passing "would be pretty difficult under the U.S. Constitution."

House Speaker Nancy Pelosi said she likes the "spirit" of the bill, but wants to know more on what constitutes taking away an American's citizenship.

"I do think it's important to know on what basis [they'd lose their citizenship]," she said. "We are committed to due process in our country. ... What's the standard?"

Pelosi said she'd have to see the language of the bill before deciding whether to support it.

Similar legislation, however, has not been successful.

In 2005, Congress sought to make it a felony for a naturalized citizen to vote in an election in their home country, among other things. The bill, introduced in the House, did not muster enough support to bring it to a vote.

"It's unconstitutional," said Christopher Anders, Senior Legislative Counsel to the American Civil Liberties Union." Taking away someone's citizenship is a truly extraordinary step and to do that based on mere suspicion and to be giving that power to government bureaucrats without ever having a court trial will be an amazing step."

Under the new proposed bill, the Department of State would have the ability to revoke an American's citizenship based on a person renouncing their citizenship. The individual, Lieberman stressed, would still have the right to appeal the determination at the State Department -- or take it to federal court.

When asked how the State Department would make their decision, Lieberman said a person would have declare the intent to renounce their citizenship -- but added that information from other sources could also "lead the state department to make that conclusion."

Anders said the government often makes mistakes in determining a person's involvement in terrorism. In that case, an American citizen could be rendered stateless if they do not have dual citizenship.

Stephen Vladeck, a professor of law at American University Washington College of Law, said the government defines "providing material support to terrorism" so broadly, "that really the most benign, innocent activity could subject the most harmless Americans to this extreme sanction."

Vladeck predicted that if a case makes its way to the courts, the statute would be in serious trouble.

"Although there have been some crimes that have been historically treated as subject to denaturalization, I think material support is so far away from the kinds of conduct that previously has been punished that way," he said. "I think the fact that this is up to the secretary of state, and not a court, really is going to make it very hard for this statute to survive a constitutional challenge."

The Supreme Court examined citizenship rights in the 1980 case of Vance v. Terrazas. The court's decision held that in determining the loss of citizenship, the government "must prove an intent to surrender United States citizenship, not just the voluntary commission of an expatriating act such as swearing allegiance to a foreign nation."

"When someone wants to appeal this [ruling], the burden of proof is on the Department of State. And there's a very high legal threshold to remain consistent with the bill. None of that has changed."