National Day of Prayer goes on despite ruling 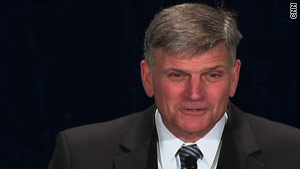 The Rev. Franklin Graham lost an invitation to the Pentagon's Day of Prayer event due to remarks on Islam.

Washington (CNN) -- The 59th annual National Day of Prayer was held Thursday against a backdrop of controversy and growing doubts about the future of the event, which a federal judge recently declared unconstitutional.

President Truman signed a bill establishing an official National Day of Prayer in 1952, but U.S. District Judge Barbara Crabb in Wisconsin ruled April 15 that the law violates the ban on government-backed religion.

The Justice Department is appealing the case on behalf of the White House. An injunction against the National Day of Prayer will not take effect until all government appeals have been exhausted.

Several events to mark the day were scheduled Thursday across Washington, including services at the Pentagon, the Cannon House Office Building and on the steps of the Capitol.

"America was birthed in prayer and founded on the God of the Bible, on his biblical principles and on his moral values," Day of Prayer organizer Shirley Dobson said.

Dobson blamed the controversy on a "small band of self-proclaimed atheists and agnostics" determined to "take down this magnificent day."

Dobson is married to Focus on the Family founder James Dobson -- a popular evangelical broadcaster and one of the country's most powerful conservative Christian leaders.

The Rev. Franklin Graham, addressing one of the events near Capitol Hill, bemoaned what he characterized as a decay in moral values across America.

The evangelist highlighted the removal of classroom prayer from public schools, arguing that many "young people today don't understand what's right or wrong."

The Army recently rescinded its invitation to Graham to participate in the Pentagon's Day of Prayer event after he made controversial remarks about Islam.

"True Islam cannot be practiced in this country," he told CNN's Campbell Brown in December. "You can't beat your wife. You cannot murder your children if you think they've committed adultery or something like that, which they do practice in these other countries."

President Obama issued his proclamation for this year's observance less than three weeks after Crabb's ruling that the event was unconstitutional, but he had no plans to take part in any specific events.

"I call upon the citizens of our nation to pray, or otherwise give thanks, in accordance with their own faiths and consciences, for our many freedoms and blessings, and I invite all people of faith to join me in asking for God's continued guidance, grace, and protection as we meet the challenges before us," Obama said in his official proclamation.

The administration toned down White House participation in the observance last year, deciding against holding a public ceremony.

During George W. Bush's administration, the White House hosted an interfaith service each year, inviting Protestant, Catholic and Jewish leaders for an event at the East Room. Presidents Reagan and George H.W. Bush also marked the day with a White House observance.

In ruling that the National Day of Prayer is unconstitutional, Crabb wrote its "sole purpose is to encourage all citizens to engage in prayer, an inherently religious exercise that serves no secular function. ... In this instance, the government has taken sides on a matter that must be left to individual conscience."