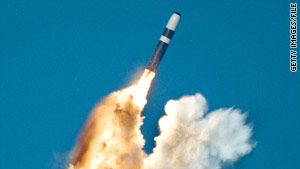 Pentagon statistics show the nuclear stockpile was reduced by 84 percent since a peak of more than 31,255 in 1967.
STORY HIGHLIGHTS
RELATED TOPICS

Washington (CNN) -- The United States has 5,113 nuclear warheads in its stockpile and many thousands more that have been retired and are awaiting dismantling, according to a senior defense official.

The release of the number of warheads marks only the second time in U.S. history the government has released the once top secret information.

The 5,113 warheads include active and inactive ones, according to the senior defense official.

The numbers released Monday also include yearly statistics on the strategic long-range and nonstrategic short-range weapons dating back to 1962. Previously released information on the stockpile size showed the number of warheads from 1945 through 1961.

The release of the most recent stockpile accounting by the U.S. government "is important to nonproliferation efforts, and to pursuing follow-on reductions" after the upcoming ratification of the updated START treaty, according to a fact sheet released by the Pentagon on Monday.

"We think the United States has set an example of transparency," according to a senior defense official.

Reporters were briefed on the statistical information at the Pentagon as Secretary of State Hillary Clinton addressed the United Nations during a conference to review of the nuclear nonproliferation treaty.

The United States has thousands more nuclear warheads that have not been dismantled but are slated to be taken apart. Those weapons have key parts removed from them and are not maintained, the official said. The warheads are only being kept secure and it would take a good deal of effort and money to restore them to working order, the official said.

The Pentagon did not provide a figure on the number waiting to be dismantled, but did acknowledge there are thousands.