Rubio depicts himself as conservative with mainstream policies 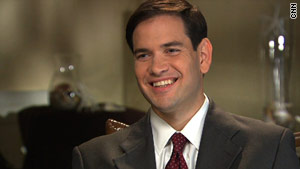 (CNN) -- Having all but secured the Republican nomination for Florida's open Senate seat, Marco Rubio said his view of conservative principles is well within the mainstream of U.S. political ideology and downplayed the decision of his one-time rival, Florida Gov. Charlie Crist, to abandon the GOP primary.

In an interview with CNN's "State of the Union" broadcast Sunday, Rubio said the decision by Crist to run an independent campaign in November instead of contesting the Republican primary was of little consequence to the GOP.

"I don't think it means anything for Republicans in Florida," Rubio said. "Our party has never been about an individual. It's been, hopefully, about a set of principles and ideals -- the idea of the free market, free enterprise system has made Americans the most prosperous people in the world, that our constitutional republic has made us the freest people in the history of the world. I've always felt that that belief system finds its natural home in the Republican Party."

Polls showed that Crist, a moderate Republican, was trailing the more conservative Rubio in a head-to-head matchup.

In the CNN interview, Rubio said his goal was to be part of a Republican resurgence that would present a viable alternative to the Obama administration and Democrats.

At the same time, Rubio rejected the notion that his conservative views and support from right-wing circles are outside the political mainstream.

"I'm not ever running away from the title" of conservative, Rubio said. "I think that limited government -- conservatism -- is what most Americans are. I think that's mainstream American thought."

Rubio added, "I'm not an anarchist. I believe government has an important role to play in society. I just don't think it should play a dominant role. I don't believe government is the most important institution in society. I believe in entrepreneurship. I believe in the free market. I want to live in a country where people can open up a business in the spare bedroom of their home, even if it's in violation of the zoning code. I want them to be able to pursue their dreams."

In particular, Rubio pointed to his view on the need for a tax rate structure that encourages reinvestment in order to spur job creation.

"I think that's a very reasonable position," he said.

It is "unreasonable" to expect investment in the American economy when Democratic policies appear to be geared toward redistributing wealth and limiting the creation of it, Rubio said.

"I think that's where you get away from moderation," he said.

Rubio embraced the support of the Tea Party movement, which helped propel him ahead of Crist in Florida polling.

"I'm proud to be associated with many of the folks in the -- all the folks in the Tea Party across the state of Florida are largely everyday people from all walks of life who have never participated in politics," Rubio said, describing Tea Partiers as "Republicans, Democrats, independents ... who believe their country is headed in the wrong direction and they no longer can stand by and watch all that happen and not be heard."

Rubio acknowledged that Tea Party events have attracted the occasional protester carrying "the weird sign," but he likened such individuals to overzealous professional sports fans.

"You see that at sporting events, by the way. That doesn't make me stop being a fan of the Florida Gators or the Miami Dolphins," Rubio said.

Rubio also offered some critiques of his own party, calling the 1994 midterm election, when the GOP retook control of Congress using Newt Gingrich's "Contract with America," a high point for Republicans. Then, he said, "Republicans in the leadership, in Congress, became indistinguishable from the Democrats they had replaced."

"The Republicans contributed toward this growth in our national debt, which is a serious ticking time bomb," Rubio said. "Republicans didn't do enough on entitlement reform. I hope we'll have a chance to be the majority party again. And this time, I hope we'll deal with those issues squarely."

Rubio made clear he has no presidential aspirations for 2012, at least for now.

"That's not going to happen," he said, later adding, "I'm not running for president."