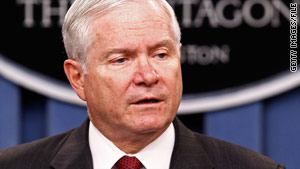 Washington (CNN) -- The secretary of defense is warning Congress not to change the rules about gays in the military until the Pentagon has reviewed the impact of repealing the laws on the force.

In a letter sent to the House Armed Services Committee's chairman on Friday, Robert Gates wrote he is "strongly opposed" to any changes to the "don't ask, don't tell" legislation before the military review is completed.

"I hope Congress will not do so, as it would send a very damaging message to our men and women in uniform that in essence their views, concerns and perspectives do not matter on an issue with such a direct impact and consequence for them and their families," Gates wrote in the letter, which was obtained by CNN.

The defense secretary was responding to a request from Sen. Ike Skelton, D-Missouri, head of the Armed Services Committee, for comment about the potential for such legislation changes.

The White House issued a statement Friday supporting Gates' position and praising him for having already scaled back the ban on gays serving openly in the military. Those changes include making it far more difficult for someone to be removed from service because he or she has been outed by another service member.

"The president's commitment to repealing 'don't ask, don't tell' is unequivocal. This is not a question of if, but how," White House spokesman Tommy Vietor said in the statement. "That's why we've said that the implementation of any congressional repeal will be delayed until the DOD study of how best to implement that repeal is completed. The president is committed to getting this done both soon and right."

The 2011 defense authorization bill is about to be considered by Skelton's committee, and there could be a push to add legislation to repeal "don't ask, don't tell" to that bill.

Advocates of repealing the law were quick to issue statements Friday supporting Congress' right to alter the law before the Pentagon review is complete.

"With all due respect to Secretary Gates, it is Congress that determines the legislative schedule, not the secretary of defense," said Aubrey Sarvis, executive director for Servicemembers Legal Defense Network. "Congressional leaders and repeal advocates may need to give the Pentagon leaders a gentle reminder."

With all due respect to Secretary Gates, it is Congress that determines the legislative schedule.
--Aubrey Sarvis, executive director for Servicemembers Legal Defense Network
RELATED TOPICS

"There is no need to bring the legislative repeal effort to a screeching halt to ensure that the views of the Pentagon Working Group are carefully and respectfully considered," Sarvis said in a statement.

"It's time for the president and commander in chief to speak clearly and frankly on this issue," he continued. "The commander in chief sounds like he is deferring to his defense secretary, to a House chairman who opposes him on repeal, and to his political operatives."

Some members of Congress have raised the idea of putting a moratorium on "don't ask, don't tell" until a permanent repeal is passed.

"We all look forward to the report on the review of the 'don't ask, don't tell' policy by the Defense Department," House Speaker Nancy Pelosi said in a statement Friday. "In the meantime, the administration should immediately place a moratorium on dismissals under this policy until the review has been completed and Congress has acted."

Gates has said in congressional testimony that Pentagon lawyers believe such a moratorium is not legal.