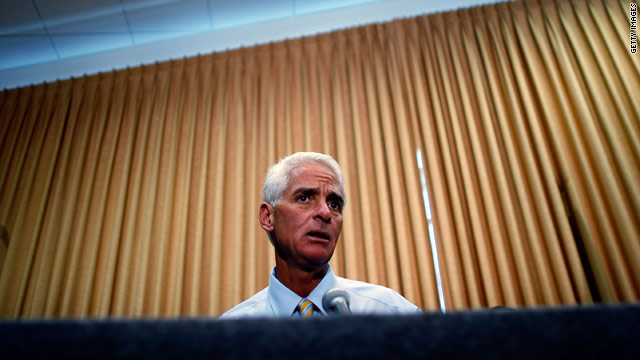 Florida Gov. Charlie Crist, a Republican, is popular among voters in the state.
STORY HIGHLIGHTS

(CNN) -- Florida Republican Gov. Charlie Crist wants independents to back his bid to become Florida's next senator. But he might not be exactly what they are looking for.

"I should be a textbook supporter of Charlie Crist's independent candidacy because I'm a centrist and an independent," said John Avlon, an expert on independent voters. "But I'm not. ... Instead of having principle and disagreements with his party, he seems opportunistic."

On Thursday, Crist announced that he will run as an independent in the Florida Senate race against Republican Marco Rubio and Democrat Kendrick Meek -- who now faces a primary challenger. On Friday, Florida real estate investor Jeff Greene jumped into the hunt for the Democratic nomination.

Avlon, author of "Wingnuts: How the Lunatic Fringe is Hijacking America" and "Independent Nation: How Centrists Can Change American Politics," said Crist's decision comes down to political calculus, something independents dislike.

"Charlie Crist has a much better chance of winning a general election than he does a close partisan primary -- especially in a season of overheated rhetoric that is overcoming the Republican Party," Avlon said. "By no means [is this] a slam dunk for Charlie Crist. It's a bit more of a Hail Mary."

In Florida, independents make up only around 20 percent of the electorate, though the number has grown significantly over time, according to Avlon, who cited state figures. Independents are considered to be the largest and fastest growing segment of the national electorate.

Along with a troubled economy, a problem for any incumbent, Rubio's criticism of Crist for embracing President Obama's stimulus package cost the governor support with the conservative base.

Avlon, who also contributes to CNN.com, said that Crist may be a shining example of what's happening to other centrist Republicans across the country.

"And part of what's happening is centrists feel like they're being forced out of the GOP and they've got a better chance in the general electorate than they do in that [primary] -- appealing to that base," he said.

Tough Republican primary fights are also being waged in half a dozen states, including Arizona, California, Colorado, Kentucky and Utah.

Sen. John Cornyn of Texas, the head of the National Republican Senatorial Campaign who supported Crist's run, said Wednesday that party primaries "are good for culling the weak from the strong."

"That's a real possibility," Steele said of the chance Crist could win in a three-way race. "It's a dynamic that's unfortunate in my view. I think that the voters out there should be given a chance to have a clean call between the Republican nominee and the Democratic nominee, Congressman Meek."

While the party switch will guarantee Crist a spot in the general election race, the anger from his decision will likely linger among Republicans.

"I expect more unmerciless bashing. This is going to be ugly, folks," Avlon said. "There's going to be a lot of attack ads between now and November, so keep your seat belts fastened. It's going to be a bumpy ride into November in Florida."

A part of that ride will focus on how Crist and Rubio will each work to appeal to those independent voters, who tend to be fiscally conservative and socially moderate.

The poll has a margin of error of plus or minus 3 percentage points.

And while the numbers of independent voters are on the rise, the number of independent politicians in Congress aren't. There are no independents in the House; the Senate has two -- Sens. Bernie Sanders of Vermont and Joe Lieberman of Connecticut.

Lieberman, a former Democrat, knows all too well about changing parties in a brutal election battle.

After losing the 2006 Democratic primary to Ned Lamont, Lieberman ran in the general election as an independent. He went on to beat Lamont and the Republican candidate in the race.

Lieberman told CNN's John King that not being in either party "puts me in exactly the position I want to be in at this hyperpartisan, nonproductive, divisive time in our politics."

"And it gives me the latitude to try to be a bridge on a lot of different issues, to make things happen. Or sometimes not to be a bridge," he added. "Just to speak out and say what I believe -- whether it makes everybody on one party or another happy or not."

While Lieberman refused to weigh in on Crist's switch, he did say that "[E]very campaign, every individual, is a different situation."


CNN's Peter Hamby and Paul Steinhauser contributed to this report.