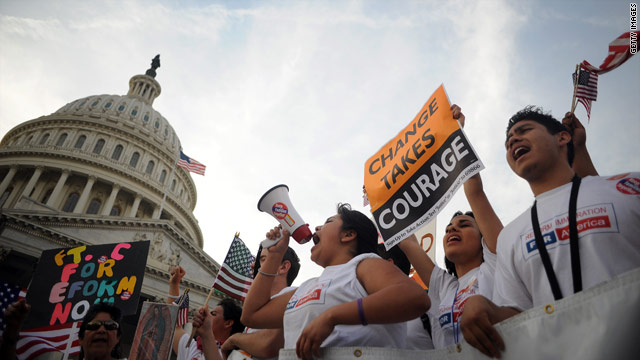 "This is a draft that reflects months of bipartisan work. It is intended to serve as an invitation to Republicans to look at it and sit down to solve problems with us," one of the sources said.

The 26-page draft obtained by CNN attempts to woo GOP senators in part by calling for "concrete benchmarks" to secure the border before granting illegal immigrants the opportunity to gain legal status.

At the same time, "high-tech ground sensors" would be installed across the Mexican border. Officers would be equipped with the "technological capability to respond to activation of the ground sensors in the area they are patrolling," according to the draft.

Fraud-resistant, tamper-resistant biometric Social Security cards would be issued to prevent the hiring of illegal immigrants. Fines for knowingly hiring someone not eligible for employment would be increased by 300 percent. Repeat offenders would face time in prison.

Illegal immigrants cleared by federal authorities would be eligible to petition for permanent resident status eight years after current visa backlogs have cleared.

Reid, Schumer, Menendez and three other Democratic senators met Wednesday evening with immigration reform advocates and agreed to hold a news conference Thursday to unveil the draft, CNN has learned.

Other leaders on the issue have been trying to secure elusive GOP support for the push, which is one of President Obama's top domestic priorities. Schumer said Thursday that he is continuing to meet with Republicans on the issue.

But New Hampshire Sen. Judd Gregg, one the Republicans who spoke to Schumer on Thursday, said he "won't do anything on immigration until the administration shows some willingness to address the border issue, and I think so far they have not fulfilled their responsibilities on the border."

Alaska GOP Sen. Lisa Murkowski said she told Schumer on Wednesday that before moving ahead with other elements of immigration reform, a "real effort must be made first to secure the border and do all we can there."

Both Gregg and Murkowski said they do not consider themselves "in play" to potentially back the Democratic plan.

Meanwhile, the top Republican in the House dismissed the plan as a political ploy with little chance of passage.

"There is not a chance that immigration is going to move through the Congress," said House Minority Leader John Boehner of Ohio.

"I've been around here for a little while and know that in the middle of an election year, after we've had bills like health care shoved down our throats ... you cannot do a serious piece of legislation of this size."

The proposal "is nothing more than a cynical ploy to engage voters, some segment of voters, to show up in this November's elections."

Boehner said that although Congress needs to take up the issue of immigration reform, "you can't do it without serious bipartisan conversations and bipartisan discussions."

In arguing that immigration reform cannot pass Congress this year, Boehner referenced Obama's comments on Air Force One on Tuesday night, when the president said "there may not be an appetite immediately to dive into another controversial issue" on Capitol Hill.

"It's a matter of political will," Obama said. "We've gone through a very tough year, and I've been working Congress pretty hard."

Several sources involved in the Democratic effort noted that Reid promised Hispanics in Nevada, a key voting bloc for the majority leader, that he would bring up immigration reform. If the Republicans immediately reject the proposal, they indicated, Reid may have sufficient political cover to not bring the divisive issue to the Senate floor.

A spokesman for Reid took issue Thursday with the assertion that the Senate majority leader is pushing the bill for political reasons.

"Reid's commitment to this issue is genuine and long-standing," Jim Manley said. "Even though people think he's doing this for political reasons, he wants to do this because he believes it is the right thing to do."

CNN's Deirdre Walsh and Alan Silverleib contributed to this report.