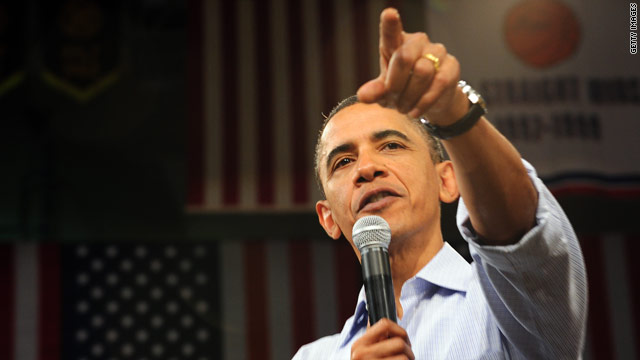 Ottumwa, Iowa (CNN) -- President Obama challenged Republicans to allow a debate on Wall Street reforms, telling an Iowa crowd Tuesday it's not right for the GOP to prevent a proposal from coming up in the Senate.

For the second straight day, Senate Republicans blocked a motion to begin debate on a bill that would overhaul financial regulations. The GOP senators say the proposal is too broad and needs to be tightened in closed-door talks with Democrats before coming to the Senate floor for debate.

"The American people deserve an honest debate on this bill," Obama told the crowd. "You should not have to have to wait one more day."

"They won't let it [the bill] get on the floor to be debated," Obama said. "It's one thing to oppose reform, but to oppose just even talking about reform in front of the American people and having a legitimate debate? That's not right."

The proposed reforms are intended to prevent another Wall Street meltdown like the one that significantly worsened the U.S. recession, Obama said.

"We can't let another crisis like this happen again," he said. "We can't have such a short memory that we let them convince us that we don't need to change the status quo."

Senate Democrats accuse their Republican counterparts of stalling momentum on the bill in an attempt to water it down. The votes Monday and Tuesday on opening debate were intended to generate public pressure on the Republicans by raising awareness of their opposition to moving forward on the popular issue.

A third vote on launching debate on the measure was scheduled for Wednesday afternoon.

One moderate Republican, Sen. George Voinovich of Ohio, indicated Tuesday he would switch his vote from no to yes if negotiations on the bill between Sen. Christopher Dodd, D-Connecticut, and Sen. Richard Shelby, R-Alabama, fail to reach agreement soon.

The American people "want us to get something done," Voinovich said in explaining why he would eventually join Democrats in insisting the bill be debated on the floor.

Voinovich wouldn't say how long he would wait before switching his vote, but added, "I have an idea of how much time it takes to cut a deal." According to Voinovich, "a whole bunch" of other Republicans are likely to make the same decision.

Dodd and Shelby have repeatedly said they were close to a deal, with agreement on most of the issues. However, Sen. Bob Corker, R-Tennessee, who also has taken part in negotiations, said Tuesday he was far less optimistic that a deal would come anytime soon.

"I just know where they are, policywise, and I just don't see it," Corker said."I don't think anytime in the near future there's going to be a bipartisan agreement."

Republican leaders have identified their main concern as a Democratic plan to set up a consumer watchdog agency to protect against lending abuses such as unfair credit card charges and mortgage practices.

Shelby headed to another negotiating session with Dodd after Tuesday's vote against starting debate on the bill. Asked whether Dodd is offering any flexibility on the consumer protection provision, Shelby said no.

"They've been pretty steadfast in their view of the consumer agency," Shelby said. "We think we have some constructive recommendations."

Dodd questioned the Republicans' sincerity, saying: "They don't want a consumer protection agency at all. Let's be honest about it."


CNN's Xuan Thai and Ted Barrett contributed to this report.