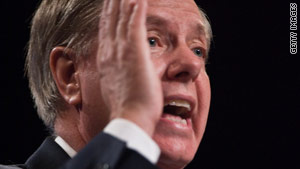 Sen. Lindsey Graham is the only Republican who has been working with the White House on the climate issue.
STORY HIGHLIGHTS

Washington (CNN) -- A climate-change bill that was scheduled to be unveiled at a news conference Monday is now up in the air after Republican Sen. Lindsey Graham of South Carolina walked out of talks.

Graham had worked with Sen. John Kerry, D-Massachusetts, and Sen. Joe Lieberman, independent from Connecticut, to unveil details of their "tri-partisan" climate-change legislation.

But Graham declared Saturday that he was walking out of talks because of Democratic efforts to bring up an immigration reform package.

"Moving forward on immigration -- in this hurried, panicked manner -- is nothing more than a cynical political ploy," Graham wrote in a sharply-worded letter sent to business, religious and conservation leaders that he has been working with on the climate-change legislation.

A senior White House official told CNN that in recent days Graham has been privately threatening to abandon the climate talks unless Senate Majority Leader Harry Reid, D-Nevada, backed off plans to move to a debate on comprehensive immigration reform ahead of the environmental legislation.

Graham is the only leading Republican who has been working with the White House on the contentious climate-change issue.

After Graham's announcement, Kerry and Lieberman postponed the news conference but did not announce an alternate date.

They pledged to continue working on the issue and expressed hope Graham would again join them.