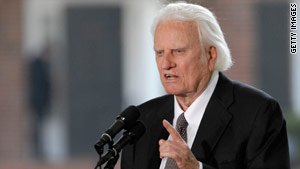 The Rev. Billy Graham and President Obama agreed to meet as soon as possible during a phone call in November.
STORY HIGHLIGHTS
RELATED TOPICS

Obama became the first sitting U.S. president to visit Graham at his family home, according to Graham spokesman Larry Ross. He is the 12th president, dating back to Harry Truman, to meet with the so-called "pastor to the presidents."

"I am pleased to have had President Obama in my home this afternoon," Graham said in a statement, adding that Obama sought the meeting while on vacation in Asheville for the weekend. "My son Franklin and I enjoyed a brief visit with the president, followed by a time of prayer together."

During the meeting, Ross said, Obama shared some insights about his faith and the challenges of being commander-in-chief.

"Like others before him, President Obama shared how lonely, demanding and humbling the office of president can be, and how much he appreciated the counsel of people like Mr. Graham and the prayers of so many citizens," Ross said.

The two men also discussed their love of golf and the city of Chicago, where Graham attended school and held several of his religious crusades, Ross said.

At the end, Graham presented Obama with two Bibles -- one for him and the other for first lady Michelle Obama, Ross said. The two men then prayed together, with Obama first praying for Graham and then Graham "concluded with a prayer for the president, his family and his administration," according to Ross.

Obama was "extremely gratified" that Graham made time for the meeting and private prayer, White House spokesman Bill Burton said.

The visit was a follow-up to Obama's telephone call to Graham on the evangelist's 91st birthday in November, Burton said. At that time, the two agreed to meet as soon as possible, according to Burton.

Ross told CNN the visit came together hastily after the White House officially inquired on Friday, after Obama arrived in North Carolina.

Obama and his family vacationed in Asheville over the weekend, and the first couple played tennis Sunday morning before their departure, Burton said.

The meeting with Graham came three days after the Army rescinded an invitation for Franklin Graham to speak at the Pentagon on the upcoming National Day of Prayer. The Army decision was because of controversial comments about Islam by the younger Graham.

Billy Graham's statement referred to the upcoming event without mentioning the controversy involving his son.

"As we approach the National Day of Prayer on May 6, I want to encourage Christians everywhere to pray for our president, and for all those in positions of authority, and especially for the men and women serving in our military," Graham said in the statement.

In December, Franklin Graham told CNN's Campbell Brown that "true Islam" could not be practiced in America because "you can't beat your wife, you cannot murder your children if you think they've committed adultery or something like that, which they do practice in these other countries."

Franklin Graham later tried to temper his remarks by saying that he had Muslim friends.

Last week, he said he regretted the Army's decision but stood by his comments.

The Army, which oversees the National Day of Prayer ceremonies at the Pentagon, feared that if Graham spoke at the Pentagon on May 6, Islamic militants would publicize his comments, potentially fueling tensions in Muslim nations such as Iraq and Afghanistan, where U.S. troops are deployed.

Graham's invitation was not the only controversy swirling about the National Day of Prayer this year.

Last week, a federal judge struck down as unconstitutional the 1952 law that established the day, saying it violated the ban on government-backed religion.