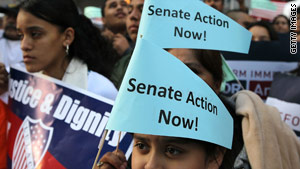 Washington (CNN) -- Two key Republican lawmakers joined a growing GOP effort Sunday to halt the push for immigration reform, arguing the time is not right to take on the massive and complex issue.

"I'm not sure how you can really justify" trying to tackle immigration or energy reform this year, Sen. Saxby Chambliss, R-Georgia, told CNN's "State of the Union."

"We've got a lot of work left on our plate between now and the end of the summer. And we're starting on financial regulatory reform. ... I'm not sure where you find the time to deal with these other major issues," Chambliss said, adding that "until you secure the border, trying to really have an overall reform package on immigration just simply can't be done."

Senate Majority Leader Harry Reid, D-Nevada, said last week he will make passing a comprehensive immigration bill a priority once the Senate completes its work on a Wall Street reform bill. He cited a controversial new law in Arizona, requiring police to determine whether a person is in the United States legally, as indicating the need for reform on a national level.

Reid's decision followed remarks by President Obama calling on both parties to pass immigration reform. The president has rejected the Arizona law, saying that "if we continue to fail to act at the federal level, we will continue to see misguided efforts opening up around the country."

"I just don't think this is the right time to take up this issue, with the border security problems, the drug wars going on across the border, 10 percent unemployment. It just strikes me that our time would be better spent at the federal level on other issues," he said.

One fellow Republican did not reject the possibility of an immigration battle in the Senate sometime soon.

When asked by NBC's "Meet the Press" whether comprehensive immigration reform might pass this year, Sen. Richard Shelby, R-Alabama, replied "maybe." Asked if it would be a good idea, he replied, "I think we have to look at the details." He added, "First thing we'd better do is enforce our borders and know who is here and who comes and who leaves. That's No.1, and then go into the rest."

The remarks Sunday followed a stunning move by Sen. Lindsey Graham, R-South Carolina, who declared Saturday that he was walking out of talks on climate change legislation because of Democratic efforts to bring up an immigration reform package.

"Moving forward on immigration -- in this hurried, panicked manner -- is nothing more than a cynical political ploy," Graham wrote in a sharply worded letter sent to business, religious and conservation leaders with whom he has been working on the climate change legislation.

Graham had worked with Sen. John Kerry, D-Massachusetts, and Sen. Joe Lieberman, independent from Connecticut, on drafting a climate change bill that was scheduled to be unveiled at a news conference Monday. After Graham's announcement, Kerry and Lieberman postponed the news conference. They pledged to continue working on the issue and expressed hope Graham would again join them.

Democrats backed up Reid on the Sunday political talk shows. Sen. Robert Menendez, D-New Jersey, head of the Democratic Senatorial Campaign Committee, told CNN he believes it is possible for Congress to take on both climate change and immigration after financial reform.

Menendez slammed the Arizona law, saying, "it is fundamentally wrong to be a second-class citizen just because you have a certain accent or you look a certain way. That's what Arizona is pursuing. That's why we need comprehensive immigration reform to secure our borders."

Such reform "is about economic interests, it's about security interests," he added.

Sen. Chris Dodd, D-Connecticut, echoed that on "Meet the Press." Calling the Arizona law "outrageous," he noted that states across the country are developing their own separate rules. "It's demanding a national answer to immigration policy. So before this even gets further out of hand, we've got to step up and do the job."

Supporters of the Arizona measure have called it a step in the right direction, taking action to deal with the challenge of millions of illegal immigrants in the country. "We in Arizona have been more than patient waiting for Washington to act," Arizona Gov. Jan Brewer said Sunday. "Decades of federal inaction and misguided policy have created a dangerous and unacceptable situation."

McConnell declined to weigh in on the bill Sunday, saying, "I haven't studied it. I know it's quite controversial. But studying a state law is not something I normally do."

Chambliss said, "If that's what the people of Arizona want to do, then certainly they have that right."

With midterm elections set for November, Republicans and Democrats are charging each other with taking positions based more on politics than policy.

Democrats have privately charged that Graham is trying to put the brakes on an immigration bill in order to protect his longtime friend, Sen. John McCain, R-Arizona. A spokesman for Graham called that charge "nonsense." McCain has previously supported immigration reform, and now faces a re-election battle against former Rep. J.D. Hayworth, a GOP primary opponent who has made his tough stance on border security and immigration one of his signature issues.

Reid is facing a re-election battle as well and trailing likely GOP opponents in the polls. Shepherding a comprehensive immigration reform bill through the Senate would likely help him in Nevada, a state with a growing demographic of Latino voters.