Dems on financial reform bill: 'The games are over' 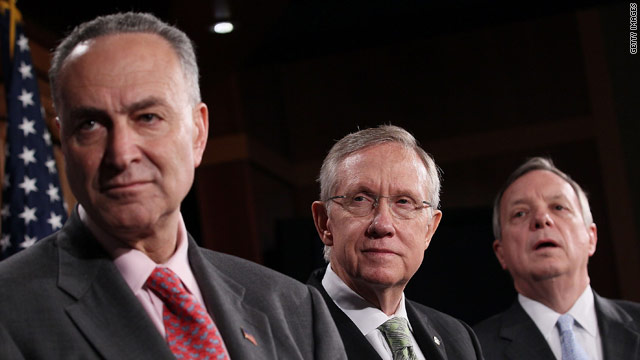 Washington (CNN) -- Senate Democrats called out Republicans on Thursday for what they said was the promotion of "falsehoods" on the financial reform bill and vowed to move the bill forward.

Republican leadership has "decided the best way to stop it ... is by polluting the debate with myths and mischaracterizations," Senate Majority Leader Harry Reid said at a news conference after President Obama's speech on financial reform in New York.

The Senate's financial reform bill would set up new regulatory oversight of the financial industry's practices with the goal of preventing another Wall Street meltdown like the one in 2008 that launched the U.S. recession.

Approved by the Senate's Banking and Agricultural committees, the bill includes an "early warning" system intended to spot signs of another crisis, as well as a $50 billion liquidation fund created with money from banks and other finance industry corporations to ensure an orderly transition in closing down failing entities.

On Thursday, Reid filed a motion to end debate on the bill, setting up that vote for Monday. The expected outcome of the vote is too close to call.

Reid said Democrats are willing to work with Republicans if they are earnest about pushing the bill forward.

"The majority leader is once again moving to a bill, even while bipartisan discussions on the content of the bill are still under way," he said, referring to the health care bill that was recently signed into law.

He said it's important to take the time to get the bill right and said discussions should continue.

"Now, I think Americans expect more of us. I think they expect us to take the time to do it right."

But Democrats say the lesson they learned from the health care debate was to push back immediately against false claims.

"On the health care bill, we allow too many lies to get out there without rebuttal because we thought they were so obviously untrue. But we've learned our lesson," he said.

His solution: "The minute these things come out the mouths of some of our Republican colleagues, we rebut them, and we rebut them again and again."

Democrats are pushing to get a reform package approved this year. The Senate is debating the motion to proceed to the financial regulations bill, but Democrats need at least one Republican vote to get it to the floor.

Democrats believe that a handful of Republicans are in play, but none has announced their intention to vote to end debate.

The House passed its version of the bill in December.

In the meantime, Sens. Richard Shelby, R-Alabama, and Chris Dodd, chairman of the Banking Committee, say they will continue negotiations over their differences in the bill.

They do so as Democratic leaders warn that the talks may be nothing more than a stalling tactic by Republicans furious that their rivals are rushing the bill to the floor just as bipartisan talks are showing signs of life.

At one point during Reid's news conference Thursday, a video was played, highlighting what Democrats see as GOP misinformation.

Sen. Dick Durbin, the second highest-ranking Senate Democrat, denied that there is any bailout provision in the Senate's bill.

"The taxpayers don't pay for any part of this, and at the end of it, the company is gone," he said. "There's nothing to bail out."

House Minority Leader John Boehner, in responding to Obama's speech, continued to insist that the bill is a bailout.

"While the president says he wants to reform Wall Street, the bill we have in front of us will actually provide permanent bailouts for Wall Streets and enshrine 'too big to fail,' " he said.

A video of Sen. Jon Kyl was also played in which the Arizona Republican talked about how consumer protection parts of the bill would regulate dentists and even butchers.

"Once again, not true," Schumer said. "The new Consumer Protection Agency will make sure that consumers are getting financial products ... and services that will help them save money or buy a home."