Angry at government, voters may revolt in November, survey shows 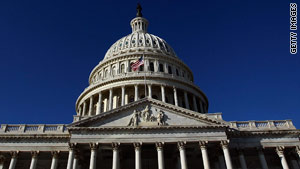 Washington (CNN) -- The party in power often suffers in midterm elections, but a recent survey suggests that "epic" discontent has created an angry and energized electorate.

And while things might look bleak for Democrats who control Congress, some Republicans tied to the establishment might also suffer the consequences.

History has shown that Americans' trust in government has declined during times of turmoil or when one party controls the White House and both chambers of Congress.

With Congress showing no signs of bipartisanship and Americans not yet feeling economic relief, the midterm elections outcome for incumbents -- especially Democrats -- may be bleak.

According to a Pew Research Center poll released this week, based on polling conducted in March and April, a growing segment of the American public holds intense anti-government views, with those surveyed describing themselves as angry with the federal government.

The reason? A "perfect storm of conditions associated with distrust of government -- a dismal economy, an unhappy public, bitter partisan-based backlash, and epic discontent with Congress and elected officials," the report concluded.

Video: The United States of angry

The poll showed that "Distrust of government soars when the public is unhappy with the way things are going in the country" and sad the recent downturn in trust began in the fall of 2008, "when public satisfaction plunged amid the financial crisis."

One of President Obama's top aides said Monday that there are "legitimate" reasons for Americans' anger.

"When the middle class in this country has seen their incomes lost and their costs of living go up, and the sense of those who are at the top act with a sense of irresponsibility that led to the worst economic crisis ... there's a reason for that frustration, and it's totally legit," White House chief of staff Rahm Emanuel told PBS' Charlie Rose.

That rising anger may sway voter turnout in November.

"Hostility toward government seems likely to be a significant election issue and an important element in both midterm voting intentions and turnout," the report said. "Consistent with this pattern of partisanship, anti-government sentiment appears to be a more significant driver of possible turnout among Republicans and independents than among Democrats."

Democrats should be worried, especially when it comes to the connection between anger at government and voting intentions by independents, the poll found.

Independents are a fast-growing voting bloc that tends to lean toward Republicans' fiscal ideology and Democrats' social policies, polls have shown.

John Avlon, author of "Independent Nation" and a CNN contributor, said anger is especially high with independents who feel that only Wall Street is benefiting from the recovering economy.

"We are seeing a situation where Wall Street's rebounded but Main Street is still feeling the pain and there's a great deal of frustration and anger about that," he said.

The rising national debt and federal spending are major factors behind the anger, added Larry Sabato, a political science professor at the University of Virginia.

"There's a tremendous national debt that just keeps growing no matter which party is in charge," he said.

Sabato said there have been many times when government has lost the trust of the people, usually over some scandal, such as Watergate, or during times of one-party rule, as was the case when Bill Clinton took office in 1993.

Noting their 1994 midterm losses, Democrats, he said, have reason to worry about what the Pew poll says.

"They're the incumbent party, and people are unhappy during a period when they're governing," he said. "The people's only recourse is to vote against incumbents in the governing party when they're unhappy."

But it's too soon to tell. It is April, after all, and the election is seven months away.

"Anybody that tells you that [Democrats will lose Congress] ... doesn't know what they're talking about because you couldn't answer that at this time in April," Emanuel said. "If they think the economy in the future is getting better, and we make this a choice about what led us into the worst recession and the set of policy changes we made to help us lead us out of it, I think we have a chance of turning this election around."

"Fundamentally, he [Obama] has got to get serious about the deficit," he said. "That's a lot of what this is all about -- independents' desire for checks and balances and divided government. ... There's nothing Democrats can do about that at this point."

If the economy continues to improve in a way that affects Main Street as well as Wall Street, that would be good for the party in power and incumbents in general, Avlon added.

The anti-incumbent feeling may also spill over to Republicans. Sabato said Tea Partiers and independents may turn against incumbent Republicans viewed as being a part of the establishment.

He cited the heated Florida Senate GOP primary race, where Gov. Charlie Crist, a one-time GOP establishment favorite, is trailing in the polls behind Marco Rubio, a candidate who has received numerous endorsements by Tea Party groups and conservatives.

"If you're identified with the establishment, you're not going to necessarily do well, assuming you have real competition," Sabato said.

But it's not all bad news for incumbents.

A CNN/Opinion Research Corp. poll released last week indicated that if elections for Congress were held today, 50 percent of the public would back the Democratic candidate in their congressional district, with 46 percent supporting the Republican candidate.

That's a switch from CNN's last poll, conducted in late March, when the GOP had a 4-point advantage. The margins are within the poll's sampling error.

"Some core Democratic groups -- chiefly women and lower-income Americans -- may be coming back, and since those groups are the ones most affected by health care, it's possible that is a delayed reaction to new law," CNN Polling Director Keating Holland said.

Democrats hold a 253-177 advantage in the House, with four seats that they once held vacant and one seat that the GOP held vacant. Republicans need to win 40 seats to take back control of the chamber.