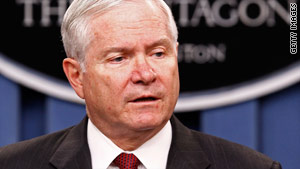 Washington (CNN) -- The Pentagon and U.S. Central Command are updating military plans to strike Iran's nuclear sites, preparing up-to-date options for the president in the event he decides to take such action, an Obama administration official told CNN Sunday.

The effort has been underway for several weeks and comes as there is growing concern across the administration's national security team that the president needs fresh options ready for his approval if he were to decide on a military strike, according to the official who is familiar with the effort.

The official did not want to be identified because of the sensitive nature of the work being conducted.

Meanwhile, Iranian President Mahmoud Ahmadinejad continued to amp up his rhetoric against the West on Sunday, claiming that Iran is so powerful today that no country would dare attack it.

"Iran's army is so mighty today that no enemy can have a foul thought of invading Iran's territory," the Iranian leader said in a speech, according to state media.

The Iranian leader has had choice words for Obama and other Western leaders, especially after not receiving an invitation to the nuclear summit hosted in Washington last week. Obama has been pressing the U.N. Security Council to slap Iran with tougher sanctions for its nuclear ambitions. Iran says that its nuclear program is intended for civilian purposes.

In January, Defense Secretary Robert Gates wrote a classified memo to the White House raising concerns about whether the administration had a sufficient policy in place, along with military options, for stopping Iran's progress in getting a nuclear weapon, the official confirmed.

The memo was first reported Sunday in the New York Times.

Gates spokesman Geoff Morrell initially declined to confirm the memo, but Gates said later Sunday in a written statement, "The New York Times sources who revealed my January memo to the National Security Advisor mischaracterized its purpose and content.

"With the administration's pivot to a pressure track on Iran earlier this year, the memo identified next steps in our defense planning process where further interagency discussion and policy decisions would be needed in the months and weeks ahead," Gates said. "The memo was not intended as a 'wake up call' or received as such by the president's national security team. Rather, it presented a number of questions and proposals intended to contribute to an orderly and timely decision making process.

"There should be no confusion by our allies and adversaries that the United States is properly and energetically focused on this question and prepared to act across a broad range of contingencies in support of our interests."

The planning effort for potential strikes against Iran actually has been underway for some time, the official said.

In December, Adm. Michael Mullen, chairman of the Joint Chiefs of Staff, told his planners he didn't believe they were taking "seriously enough" the need for fresh thinking about how to attack Iran's nuclear sites if the president ordered such a strike, the official said.

The official strongly emphasized that the U.S. military is always updating plans in order to be ready for the president. If Obama were to order a strike against Iran, he would turn to Mullen, Gates and Gen. David Petraeus, the head of Central Command, for their advice on how to proceed. The official would not discuss how any of the updated plans might differ from previously existing military strike options.

Mullen and other Pentagon officials have continuously endorsed diplomacy as the preferred option against Iran. In February Mullen publicly noted that a military strike against Iran's nuclear program would not be "decisive" and would only delay and set back Iran's efforts.

Gates recently expressed growing concern about understanding exactly what Iran's intentions may be.

"How you differentiate, how far have they gone. If their policy is to go to the threshold but not assemble a nuclear weapon, how do you tell that they have not assembled? So it becomes a serious verification question. And I don't actually know how you would verify that," Gates said on NBC's "Meet the Press."

"So they are continuing to make progress on these programs. It's going slow -- slower than they anticipated, but they are moving in that direction," he said.

In general, the U.S. military develops what is sometimes called targeting "folders." These files detail all the known facts and intelligence about a target, include precise location, how deeply buried it might be, the civilian population surrounding the target, the geology of the land and rock around the area, and detailed options about which U.S. weapons might be best used to destroy it.

The U.S. intelligence community is also currently involved in the updated planning effort, providing the latest assessments about Iran's nuclear progress at various sites around the Islamic republic.

There have been several public hints about the new target planning. Last week, a Pentagon official told the Senate Armed Services Committee in a written statement, "Through prudent military planning we continue to refine options to protect U.S. and partner interests from Iranian aggression, deter Iran's destabilizing behavior, and prepare for contingencies."

Back in December, Mullen deliberately, the official said, made a reference to Iran in a public document called "the chairman's guidance," posted on the Internet saying, "should the president call for military options, we must have them ready."

There have been growing signs of Iranian efforts to militarily protect their nuclear sites. The U.S. Defense Intelligence Agency notes that last year Iran established a separate air defense force, with the stated intention of defending nuclear sites with missiles and air defense radars.