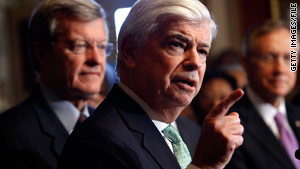 Republicans have pounced on the $50 billion provision, saying the legislation will lead to more government bailouts of large banks, effectively stalling progress on the bill.

"The ex-ante fund was not in our original proposal we announced almost a year ago, and we don't feel it is an essential part of final legislation," said one administration official late Friday. "The president will only sign a bill if it passes the test of putting an end to bailouts."

White House aides have vehemently denied for days the provision will spark more bailouts. Republican aides asserted the shift is a sign the White House fears the criticism is having an impact.

But Democratic officials suggested the move is really an attempt to challenge Republicans on whether they will still oppose the reform bill even after the controversial provision is removed. That would play into the White House's efforts to portray the GOP as defenders of the status quo on Wall Street.

Still, White House aides said the president is more focused on the larger issue of reform instead of any one provision.

"What is important is that we have a mechanism that allows us to wind down failing firms at no cost to the taxpayer," said White House spokeswoman Amy Brundage. "The Dodd bill does that, and we will work with Congress to make sure we achieve that objective."